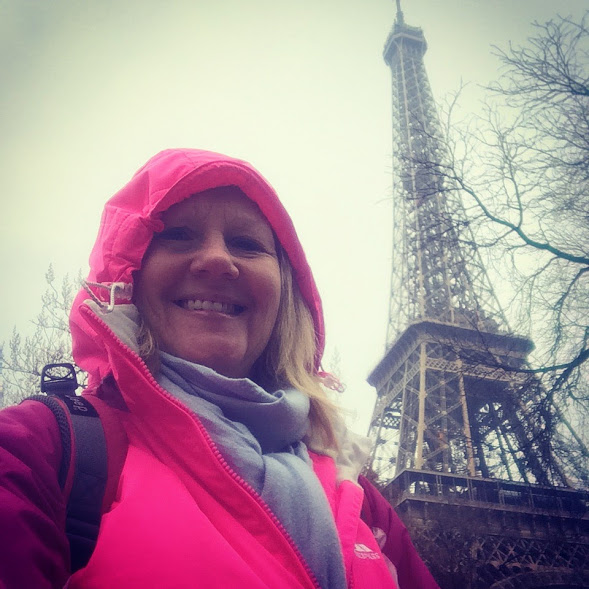 By AngelaLewis | Travel | No Comments

Paris has been my favourite city for as long as I can remember,  my first visit was with my school, on a flying French trip to Paris and the Loire Valley.  We visited on a coach in 1974.  I went to an all girl grammar school,  so our trip was a 52 seater coach full of an equal amount of prepubescent girls and a few teachers,  who came along to try and keep us in order which they never quite managed. 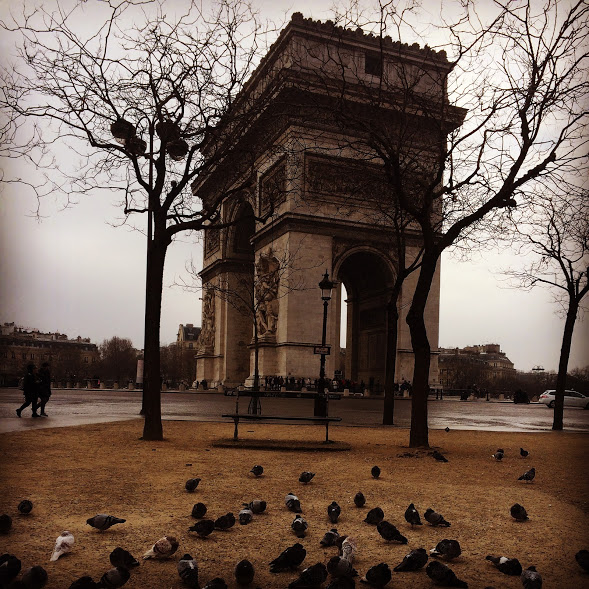 I have traveled to Paris by many means including flying, driving, by train, and coach, I have even cycled to Paris from London many times, each time has added to my growing love of this wonderful city and all things French! Oooh LA LA!!! 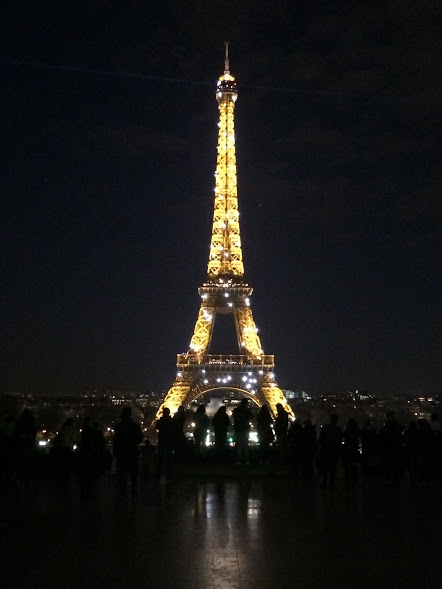 This time is no different, I am staying in a different area to where I normally stay and I’m staying in hostels to help my money last longer.  I have always wanted to do the proper backpacker thing i.e. staying in hostels with a little  couchsurfing, while sourcing the cheapest way to get from a to b and carrying as little as possible, so this trip is all about that! I must say I think I prefer staying in nice hotels and taking taxis but I am determined to do this. 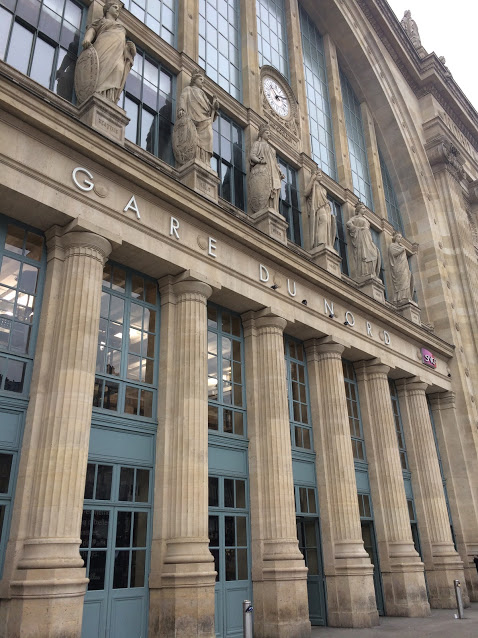 My first night I am sharing a room with a young guy from South Korea, he wakes a lot in the night and makes weird noises, I’m not getting the best sleep so far! Lol I suppose it could be worse!  The hostel is nice and clean, has lots of amenities here including free WiFi in all areas and a kitchen to cook your own food! Thankfully there is also a lift, as my room is on the fourth floor. 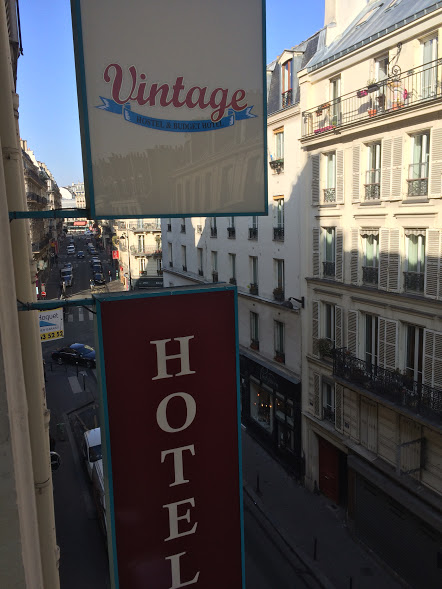 Today I set off toward Gare due Nord, near where I’m staying, it’s quite a central station toward the North of the city centre, I wanted to visit as many monuments as I could without going in or climbing to the top.  I have climbed to the top of the Eiffel Tower and Arc de Triomphe many times before so don’t feel as if I have missed out! It’s pretty difficult while traveling with one crutch anyway!  Coping with all the steps on the Metro has proven exhausting today!  I got back to the hostel about 7pm totally worn out but have seen so much today! 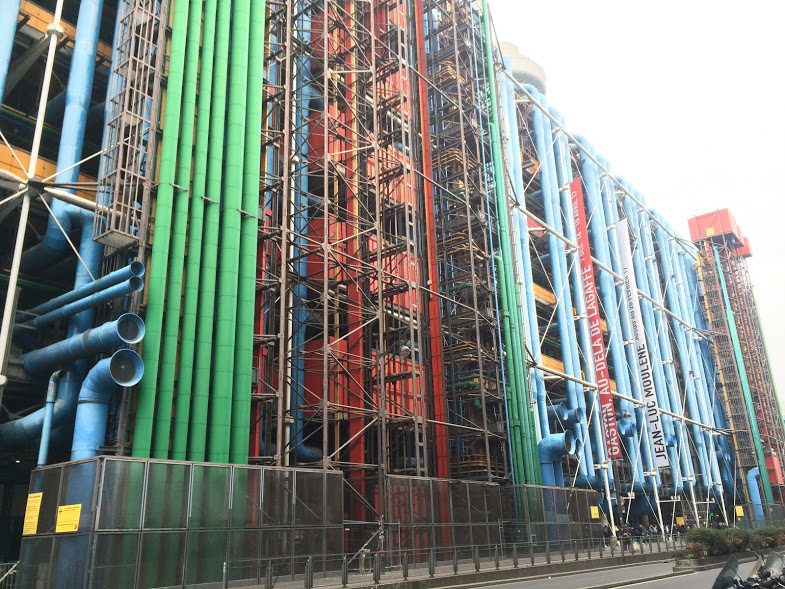 I bought an all day ticket in order for me to see as much as I could which cost me 7€ 30c, first stop was the centre Pompidou, which houses the largest collection of modern art in the whole of Europe.  I’m not sure why I have never been before? Probably because I was with others who did not want to go, anyway I managed to see it again from the outside only which in itself is a spectacle.  It is called the inside out building because of its design, all the pipework is on the outside and painted in primary colours! It still looked as spectacular as I remembered it when we drove past on our quick tour of Paris with the school.  This time I intended to go in but there was such a huge queue I decided to go for a walk to Notre Dam which I could see up the road. 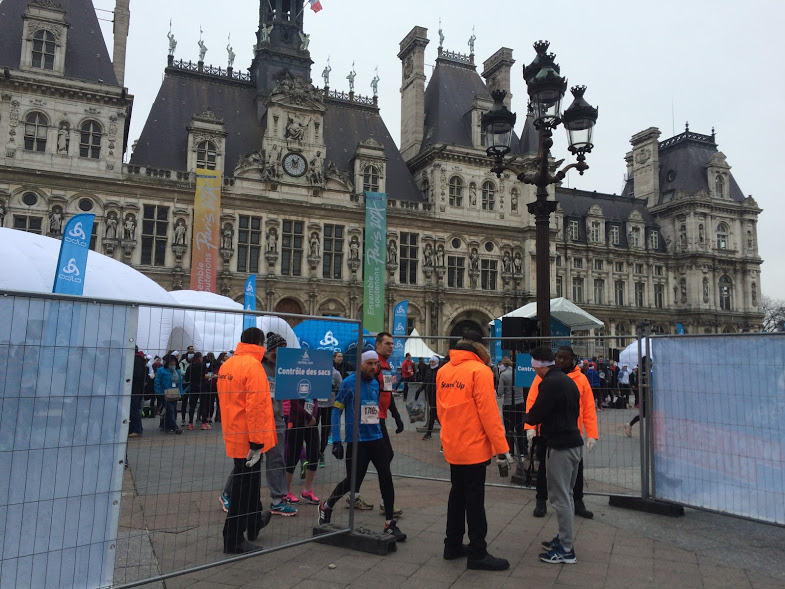 I took the scenic route near the river and came upon a temporary sports village, the kind that is erected overnight for marathon type events and disappears just as quick, anyway it turns out I was there for the Crystal run a 10 k run which goes along either side of the Seine,  starting up near the Eiffel Tower and finishing near Notre Dame.  I stayed around here for a while enjoying the atmosphere, everyone was really excited, it was a huge event with many many marshalls all wearing branded clothing, sponsored by the coconut water company cocoloco! They were handing out coconut water all over the place,  there was hot food being prepared at the finish line, with loud music blasting from the sound system while everyone did their stretches.  It was great to feel the vibe, I have missed it since I stopped running!  I watched them all start then walked over Pont Neuf trying to find the Metro so I could make my way to the Eiffel Tower which, by now I could make out in the misty distance! 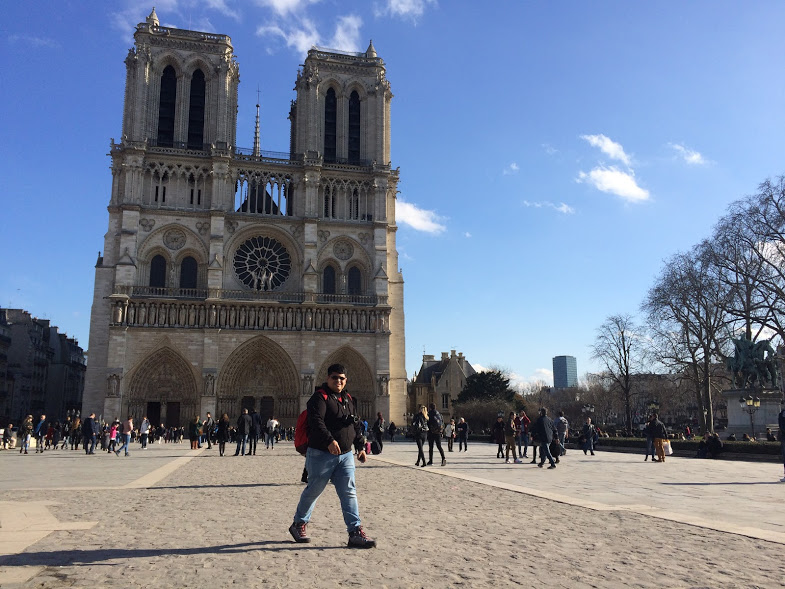 I got off the Metro with a little way to walk to the Tower and on the way I found a quirky, arty photography shop, very risque but fun and some great photographers work inside, I could have spent the day there! 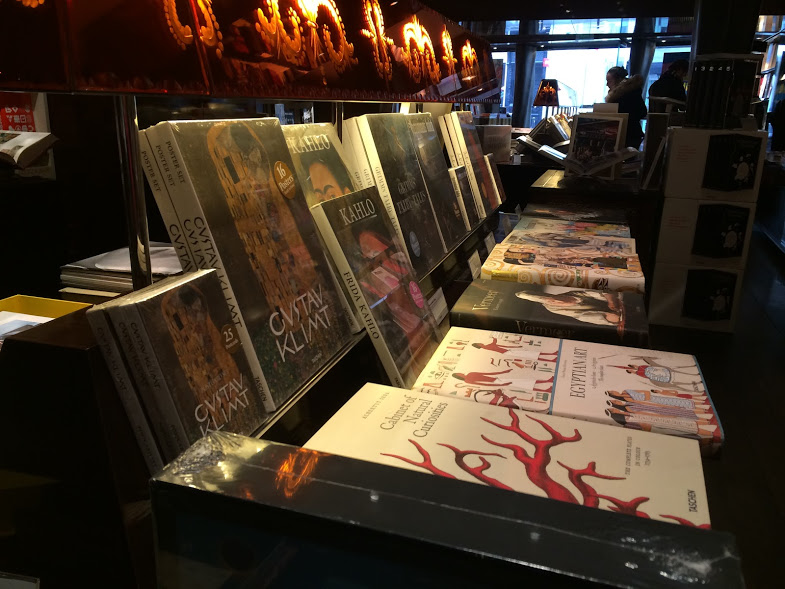 I love the Eiffel Tower with it’s imposing stature so very regal and majestic!  I have climbed it before with my children carrying a pram/buggy in one hand and baby/child in the other,  I had no urge to climb it today with my one crutch!  So I just looked at it in awe, although also with some disappointment due to the whole surrounding area,  which surrounds the base, being fenced off!  The last time I came people were able to stroll under the tower and gaze upward into its central structure, in wonder at such a huge feat of engineering, but now there are fences and gates for entry only if you are climbing to the top, there is talk of building a perspex wall around it but I think there might be quite a bit of local opposition to this.  Apparently it is because of the terrorist threat that Parisiennes feel they need to increase the security around the most iconic sites.  Today at some of the other monuments armed police quietly patrolled while armed soldiers were also on standby. 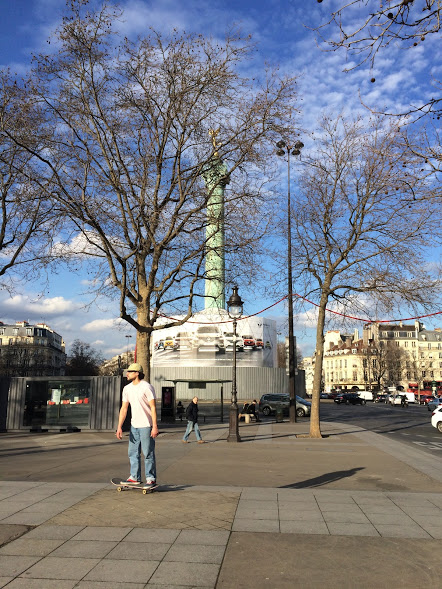 I took plenty of photos of the tower then made my way back to another Metro station when I came across a fantastically green garden walled building!  It was Patrick Blanc’s vertical garden, a concept which is being realised in many major cities throughout the world! It’s quite amazing to see bushes growing within the greenery and very difficult to prune, I should imagine. 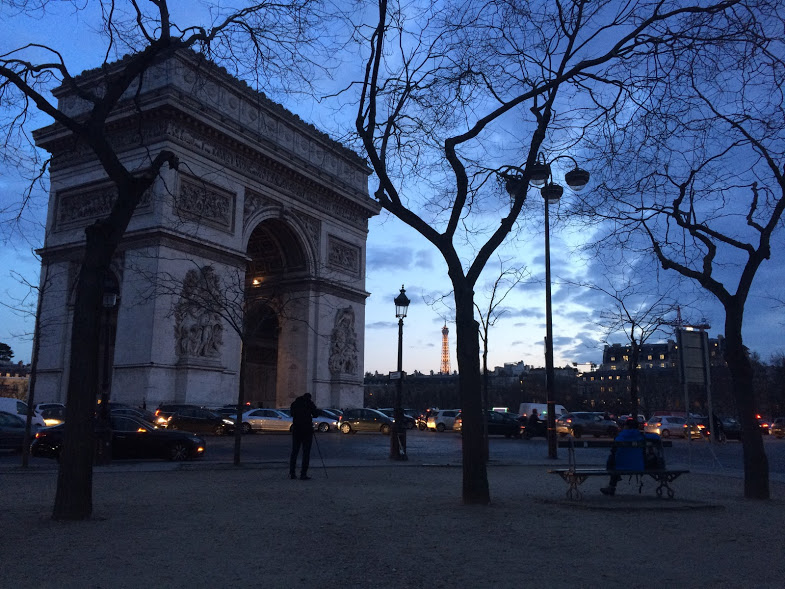 My next Metro journey took me to my favourite monument in Paris, the magnificent Arc de Triomphe which is at the Western end of the splendid Champs Elysées and houses the tomb of the unknown soldier from World War 1 and where the Memorial flame burns.  I love it because it is so iconic and stands majestically on the hill, you can see it for miles around, the carvings around its arches are depictions of war scenes from French Revolutionary and Napoleonic wars, as well as the well known Marseilliasse also known as the Departure of the Volunteers of 1792.  The names of 660 generals are inscribed on the inner arch walls.  You can climb to the top of this monument too and there is a fantastic view of Paris from the top!  One of my favourite things to do here is drive around the Arch, it stands proudly at the intersection of about twelve roads and they all merge onto this roundabout in a mish mash of traffic with no rules, your insurance won’ t cover you if you regularly drive in this place, there is about 12 lanes of traffic with no designated road markings, that’s all you need to do is look ahead and don’t hit any cars, no lookng behind, if they hit you it’s their problem. 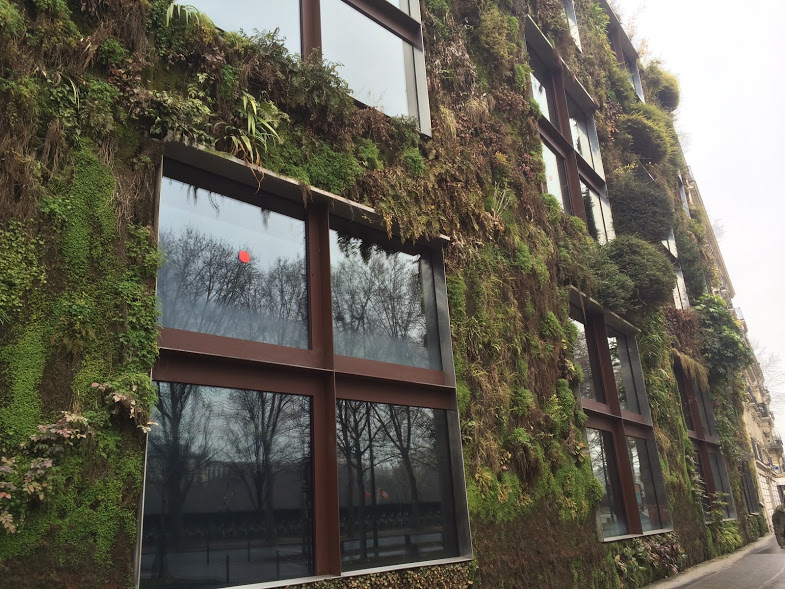 My final stop for the day was Sacre Couer and Montmartre, the artist district of wonderful Paris.  The Sacre Couer Basilica is The Basilica of the Sacred Heart of Paris, a Roman Catholic church and it’s perched on top of an even bigger hill than the Arc de Triomphe, there are 300 steps, needless to say I definitely didn’ t climb this one, I will need to make another visit one day when my leg is fully recovered. 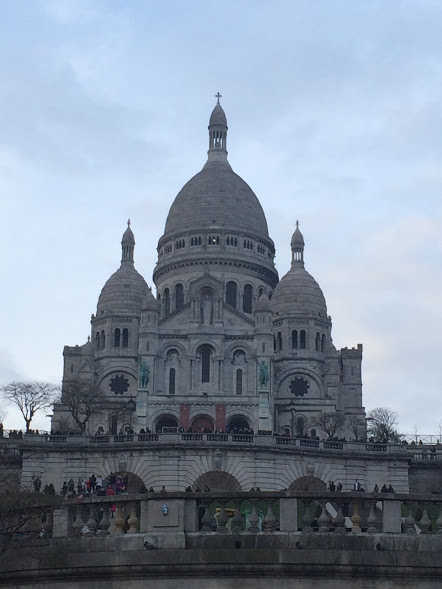 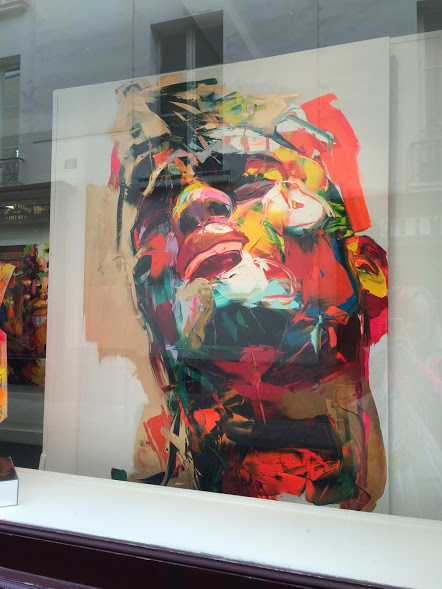 What an eventful day, totally exhausted and need my sleep now, I will be looking for buses to Epernay tomorrow and trips to Mont St Michel and I definitely want to go back to the Pompidou centre and take a look inside. 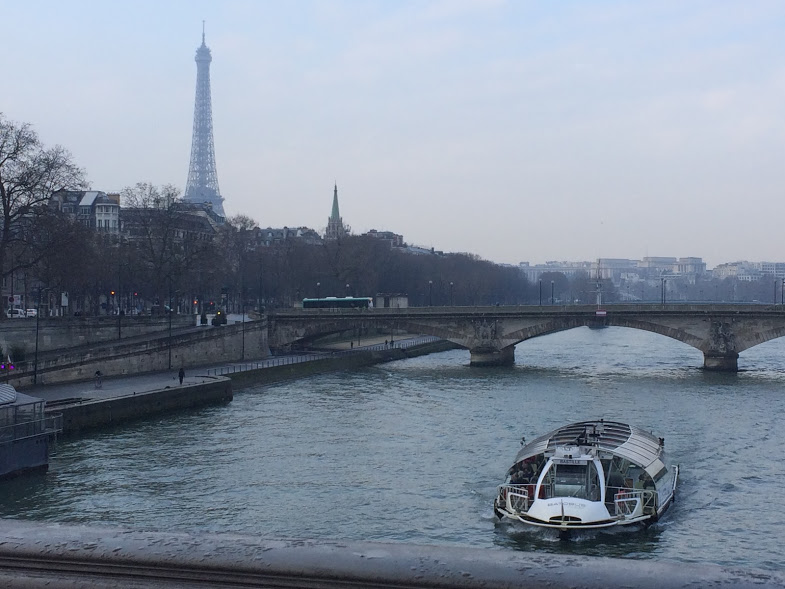 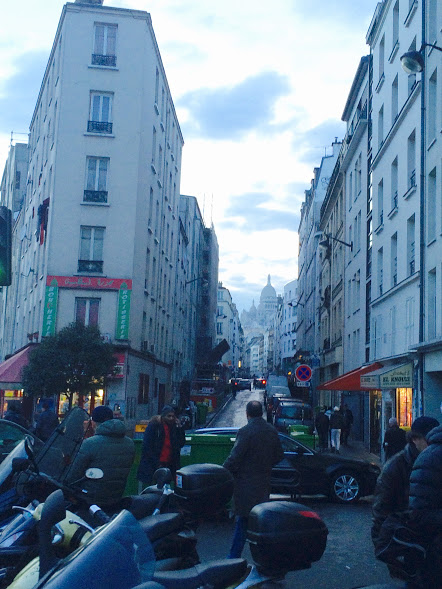