City life (A Westerner in the East) 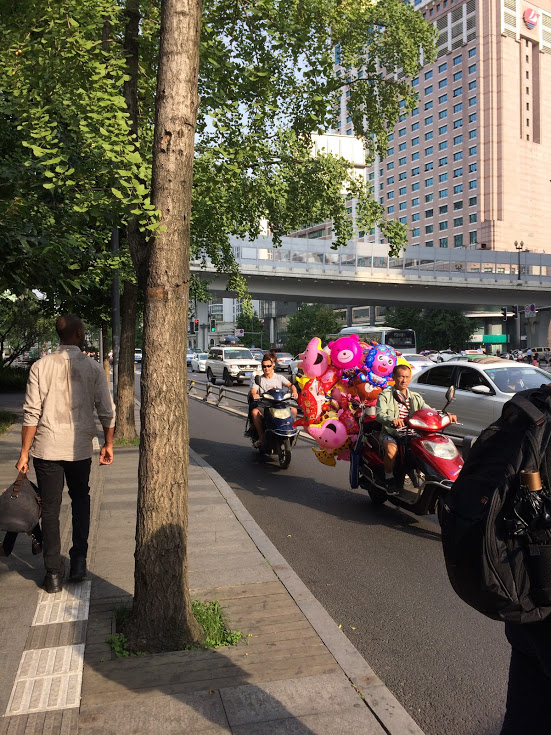 City Life (A Westerner in the East)

You are probably thinking, what could be different? City life is city life, right?  Wrong, city life is similar in many ways to the West, but in China the cities are all bigger and not just a little bigger, hugely bigger, the skyline is completely awash with high rise blocks of apartments which-ever way you turn.  There is no escaping the high rise blocks that blot the landscape for mile after mile on whatever road you decide to take.  I live in a suburb of Chengdu called Shuangliu, it takes an hour and a half to get back in the city, although I say get back, but really I’m still in the city, I live near the airport and every now and then, through the summer haze I catch sight of a plane flying off to some foreign land or bringing more people to Chengdu. 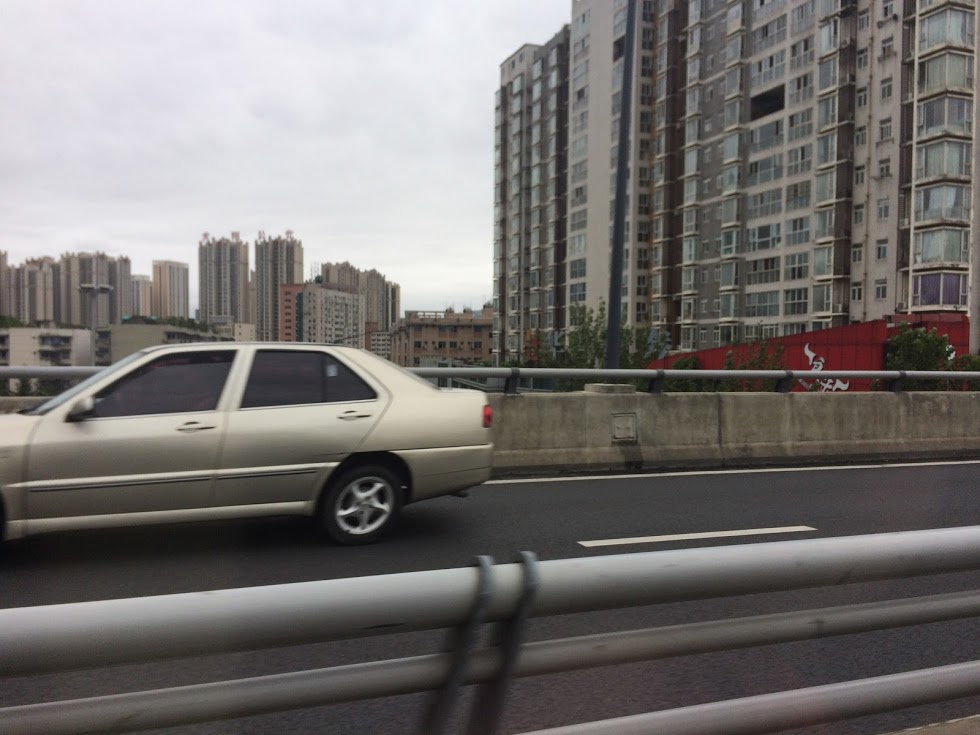 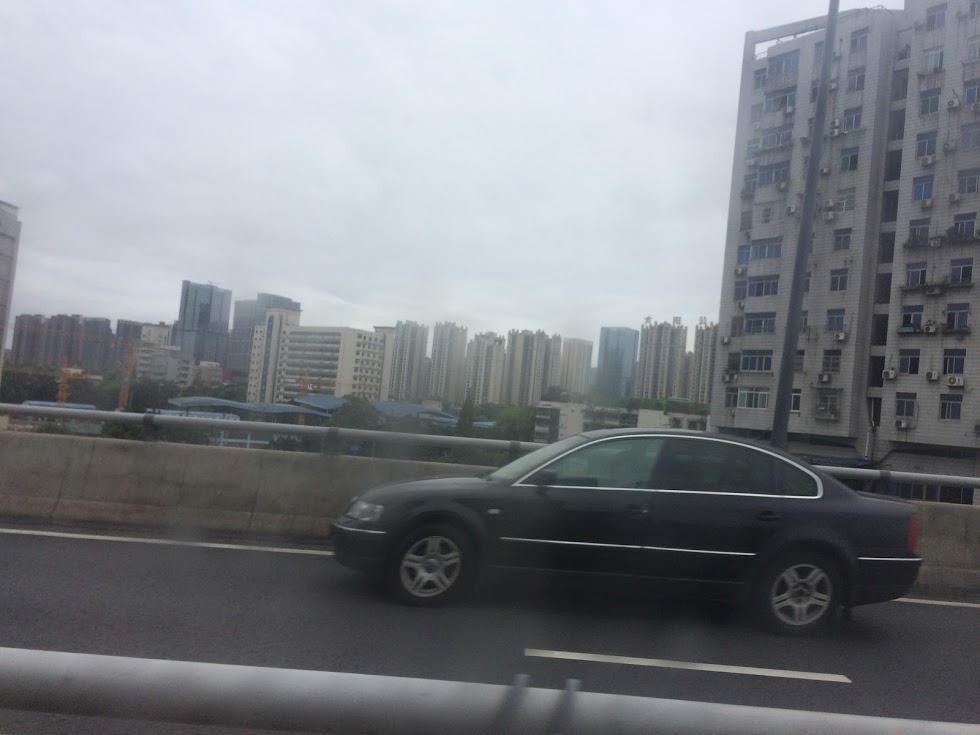 The enormity of China is evident in everything you do here, the amount of people everywhere is just immense, it is just like a beehive full of millions of buzzing, busy bees, coming and going, living their lives in the best way they can. 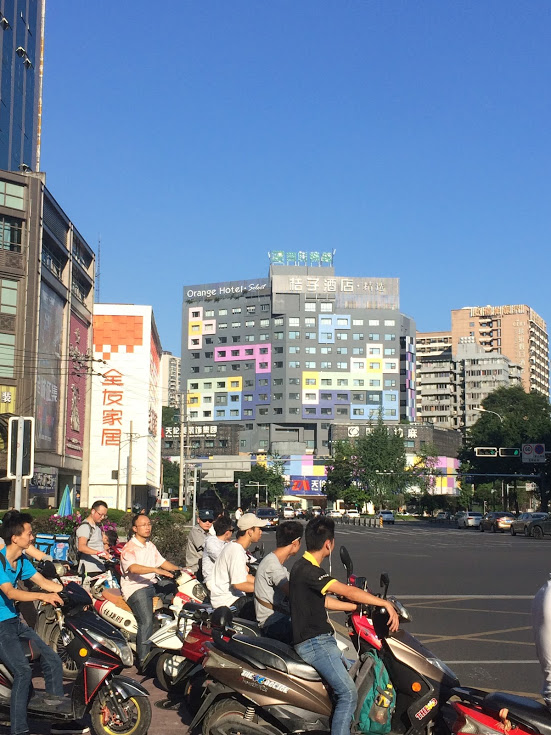 I am from a small village in a tiny country called Wales and most of the Chinese people have no idea where that is, in fact most of the people see a Westerner and think they are from America, I am pointed out many times by children to their parents or sometimes even adults and sometimes I hear them say “Meiguo ren” which even with my limited knowledge of Chinese, I know means “American person”. 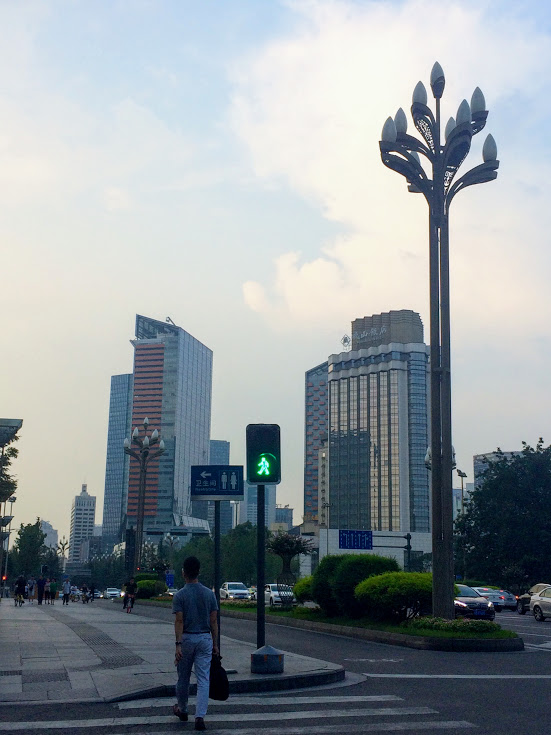 But to get back to city life, the noise is unrelenting, which I know it is in most cities but the road traffic is just on another level in Chengdu, and everyone beeps their horn constantly, there is not a minute of any day or night while staying in the city that you won’t hear the horns beeping by many, many motorists, no matter if you close windows or even put in your earplugs.  Over here if you want to get somewhere, you beep to get someone slower out of your way.  They have cycle lanes which every manner of bike inhabits, from the simple pushbike to three wheeled motorised vehicles carrying all sorts of wonderful stuff, to tuk tuks and silent but deadly electric scooters, that if in a hurry think nothing of mounting the pavement and beeping you out of the way. 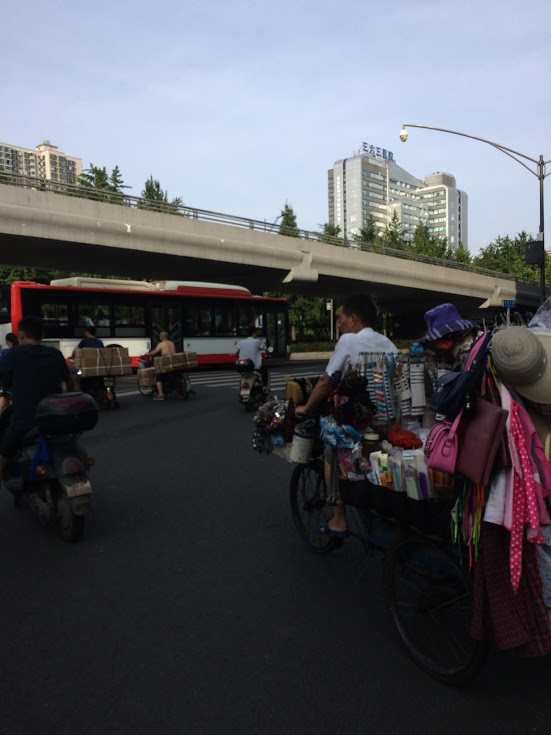 The amount of people who travel on these vehicles varies from just the rider to the whole family and I mean the whole family, I have seen a motorbike carrying the rider with wife holding baby on the back with two smaller children standing on the kickboards, either side of the handlebars, none with helmets or restraints of any kind! 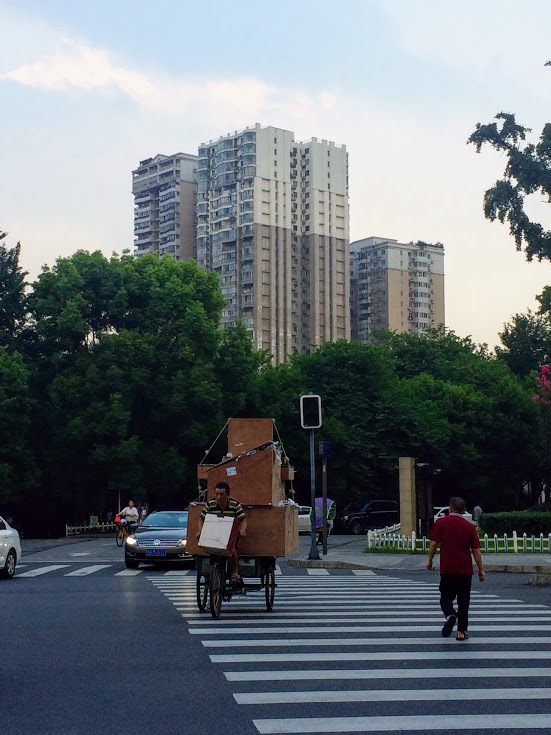 The stuff you see carried by one of these vehicles is also eye-popping, large piles of cardboard stacked and bundled ready for recycling, where the bundle is taller than the bus riding alongside and wider than that same bus, but somehow the 70 year old gent seems to manage to balance it all while zipping about like a little ant in and out of the traffic, like Shane Williams on the rugby pitch, dodging each vehicle as he goes. 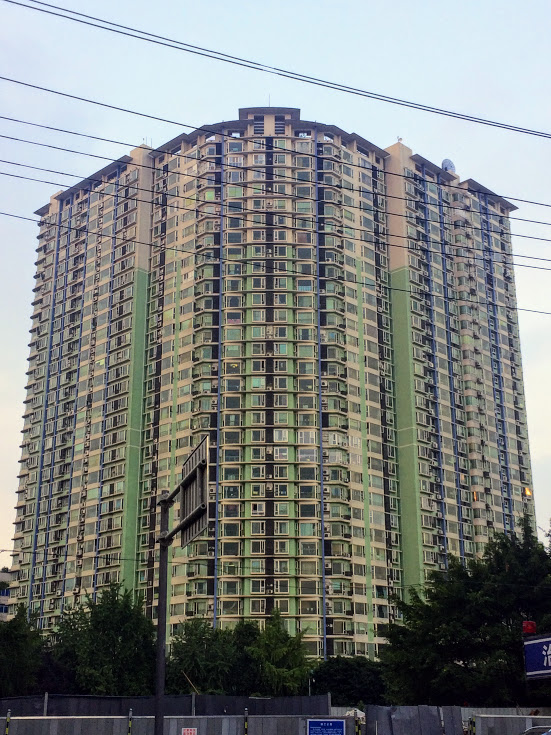 The age of each vehicle also varies greatly from seemingly 100 year old three wheel carts to modern day racing bikes!  On the motorised front, all manner of vehicle you can ever imagine I have seen cross my path on the roads of Chengdu, but none are more deadly than the electric bikes which apparently are the law now, no motorised bike is allowed to run off petrol or diesel so they are all electric, but at least that makes for a quieter commute.  Unfortunately when I say deadly, I mean they are the ones to watch for because you can’t hear them coming, if you don’t see them either, you are a goner. 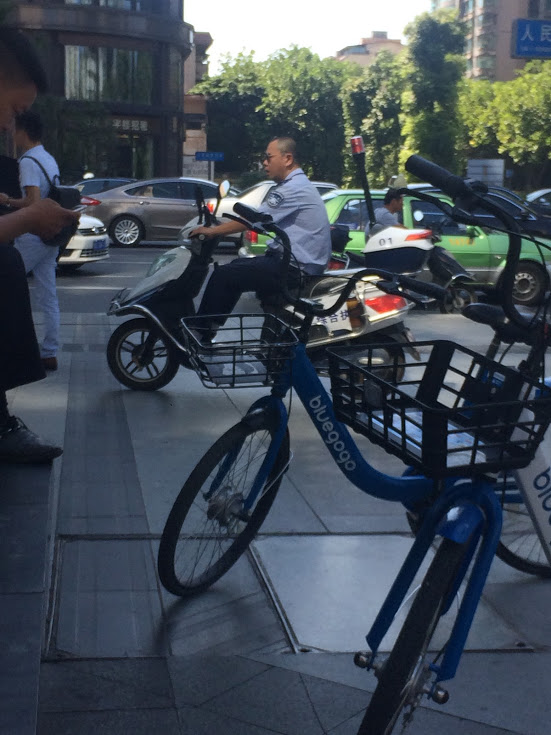 While walking the roads of Chengdu you must and I mean must, always be looking all around you at all times because they can creep up on you when you least expect it, like when you are strolling along the path by the river admiring the city skyline as the sun dips below the horizon, creating a warm glow all over the city, when suddenly BEEP, BEEP, BEEP, another one wants you out of their way, there is no place these bikes won’t go, so beware at all times. 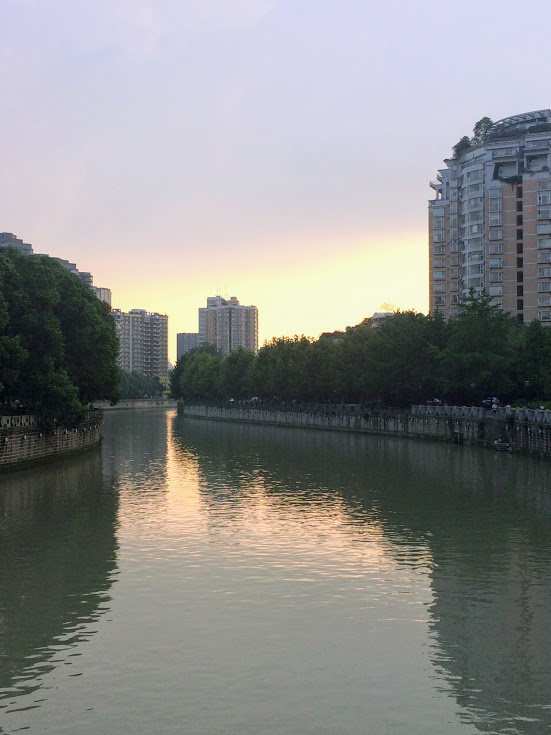 And don’t be fooled by the dual carriageway system, oh no, you look at the road and think “ok, so this is for the traffic heading West and the opposite side is for the traffic heading East” makes sense right?  But oh no, the traffic could be heading in any direction on any side of the road, don’t get me wrong, most of the vehicles like cars and buses and trucks do follow the rules most of the time, but no one else does.  On one of my walks back to Mrs Pandas hostel one night, which is pretty central and within the busier roads in the city, I saw a young girl of about 18 cycling in the middle of the road on a dual lane one way road, which was jam packed with cars at peak time, these two lanes were not as wide as some of the other roads, as it ran alongside the river, but she was trying to balance in between the cars and she was going in the OPPOSITE direction.  Astounding!!  Yet I only ever saw one accident, which was pretty minor, a slight bump when the cars were in one of the many traffic jams. 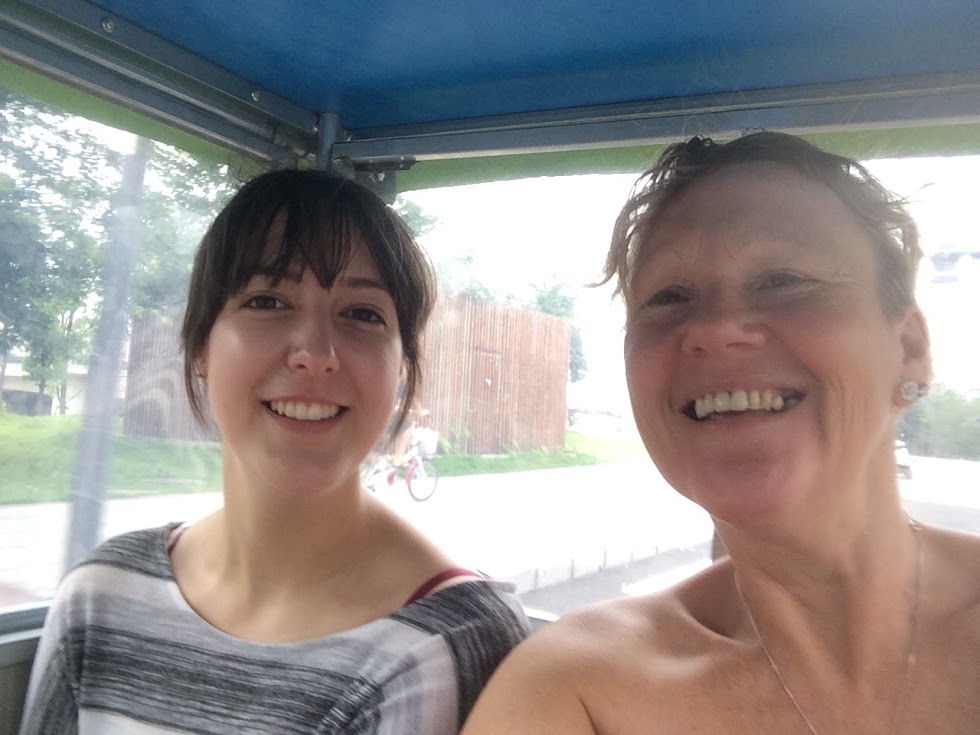 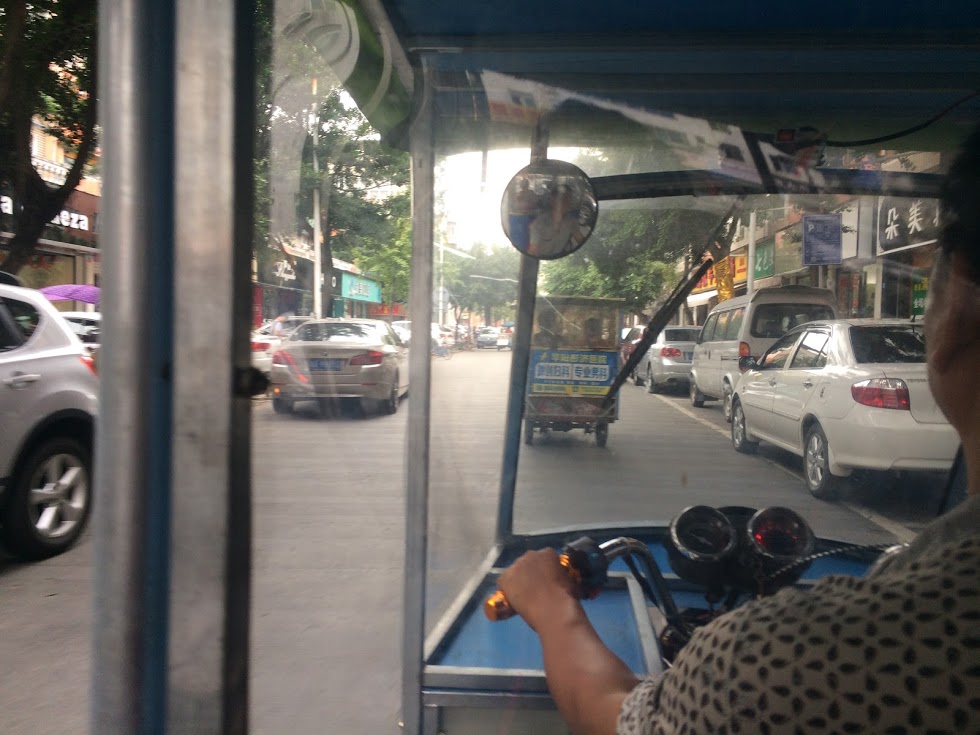 They have traffic lights at most junctions and when the green man starts flashing, again, don’t be fooled into thinking you are safe to cross the road, not always.  Just like in America vehicles can still turn right on a red light but unlike America, where, if there is someone on the crossing, on the right, they have right of way, NOT IN CHINA, in China the car is king, so you need to be aware at all times that you could get knocked down unless you seriously watch what you are doing.  No iPod while walking the streets of Chengdu.  If you come across a normal zebra crossing, don’t think that if you wait on the edge of the pavement that anyone will stop for you, because they won’t, if you want to cross it is up to you to dodge the traffic and go for it when you find a space, which could similarly apply to crossing anywhere on the road, even if no crossing is present, however I like to try and find a crossing, therefore if I do get knocked down then at least I have something in my favour!! LOL!! 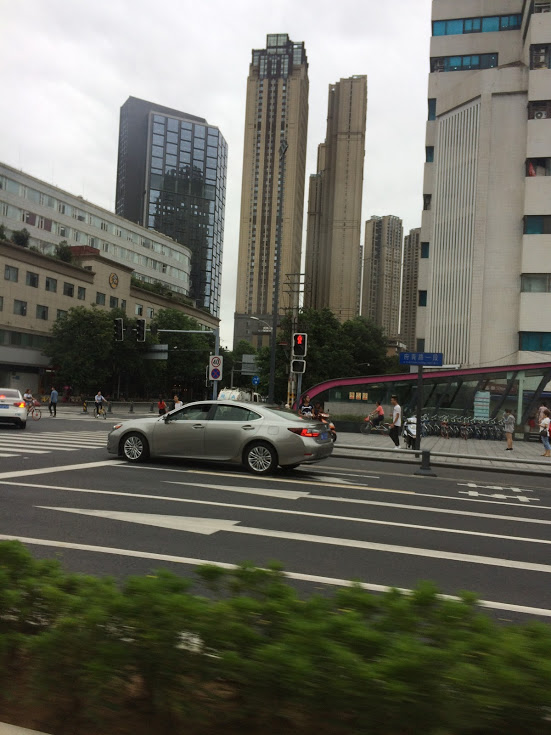 Even though this city life is mad, I love it, it makes me smile every time I am at a junction just watching the clamour for space, when the lights change and the masses begin to move again, it is a fascinating sight to behold and can keep me mesmerised as I try and capture this hubbub with my iPhone camera!!! And bang, I miss my cue to vehicle dodge, dicing with death, yet again on another crossing; alas I will wait for the next light change!! 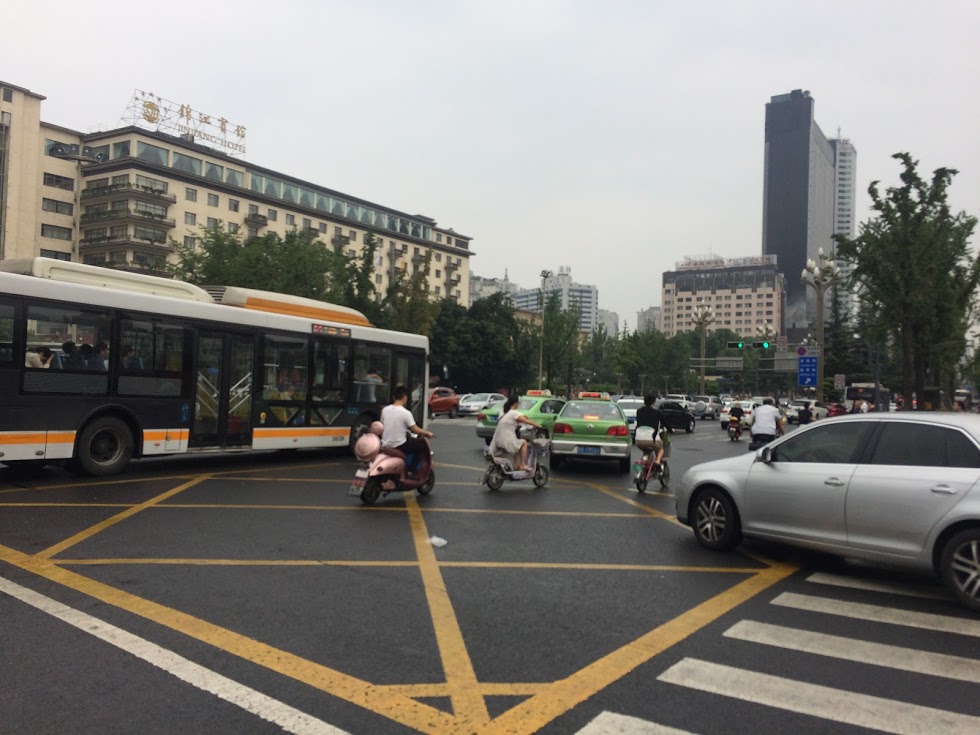