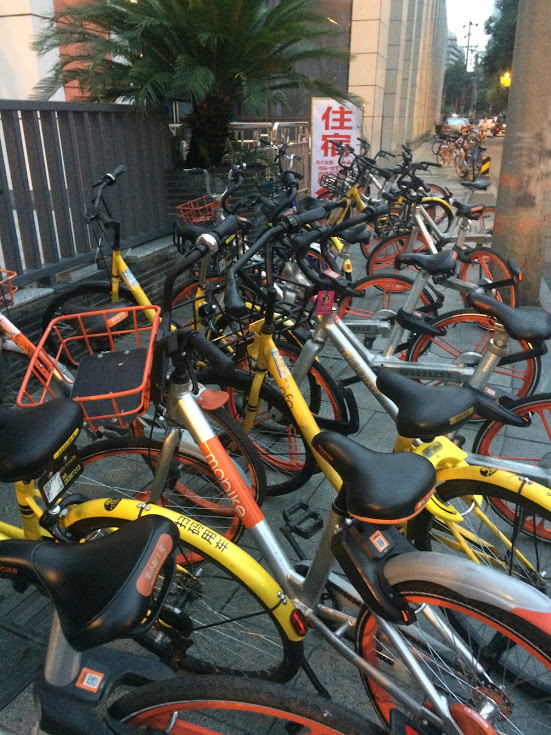 They have the best bike hire system that I have ever seen here in Chengdu, I am assuming it is in most Chinese cities as the owner of the company Mobike was recently on the news talking about shares in the company, I didn’t understand what they were saying because it was in Chinese, lol, I am watching in the hope that some of it sticks while I am learning Chinese. Anyway having done some research, Mobike is the largest bike sharing company in the world with its bikes in over 160 cities in China and head office in Beijing.  In December 2016 Mobike made Shanghai the world’s largest bike share city and it has just launched in Manchester, Florence and Milan with a September start planned for London. Basically it works in Chengdu through the wechat app, now WeChat is the social media app to end all social media.  In China, it is used for everything and I mean everything, it is linked to your bank account so you can pay for goods and services just by clicking on the QR code and don’t go thinking that there aren’t many people using QR codes because there are in China.  They are huge, even the most rustic of backstreet food traders has a QR code which you scan when ordering food and your money goes straight into his account, simple! Well, how it works with the bikes is that there is a locking system on the bike with a QR code attached you scan the code into your WeChat and you can unlock the bike and cycle off wherever you want, whenever you want.  The beauty of this system is the fact that you can pick one up anywhere and drop it off anywhere, no more fussing with bike hire shops, no more taking it back to a familiar bank of bikes, you can literally leave it anywhere you need to, consequently they are all over the city, on grass verges, near the station, by the river, at every road junction, at the bus depot, I even saw one in a field on its own near the Panda centre, they are scattered far and wide across the city and everyone uses them from students to business people. Once my bank account is sorted I intend using them regularly, apparently you can register online through the app and get even better deals, my friend signed up for a monthly agreement of something like £1 and she had the first month free to use as many times as she liked, anywhere she liked. What a fantastic innovative idea and it seems to work so well, however I should imagine that in some countries it is more open to abuse.  From what I can see of China so far there is not much vandalism, whether that is true or not I don’t know but most people tend to look after the city so it’s not the same as some cities back home where they might get stolen or vandalised, but I suppose I shouldn’t jump the gun, it’s early days, only just been launched in the UK and I sincerely hope it works because it’s a brilliant idea and can save people so much time and money. The other companies operating bikes that I have seen so far are Ofobikes which are yellow and there are blue bikes as well operated by Youon, the Mobikes are orange.  There is talk of the Ofobikes and Mobikes merging which will have a global effect on the company.    After having done a little more research it looks like you don’t need to download the app to operate Ofobikes, you can just use them as a one off, linked to your WeChat which is what I will be doing once, my bank account is set up!!  I just hope that the seats are adjustable as I have just found out that they are not on Mobikes! And there are lots of problems with the size of equipment here which I will talk about in another post, for now I’m looking forward to cycling to work every day and exploring the area where I live by bike!!