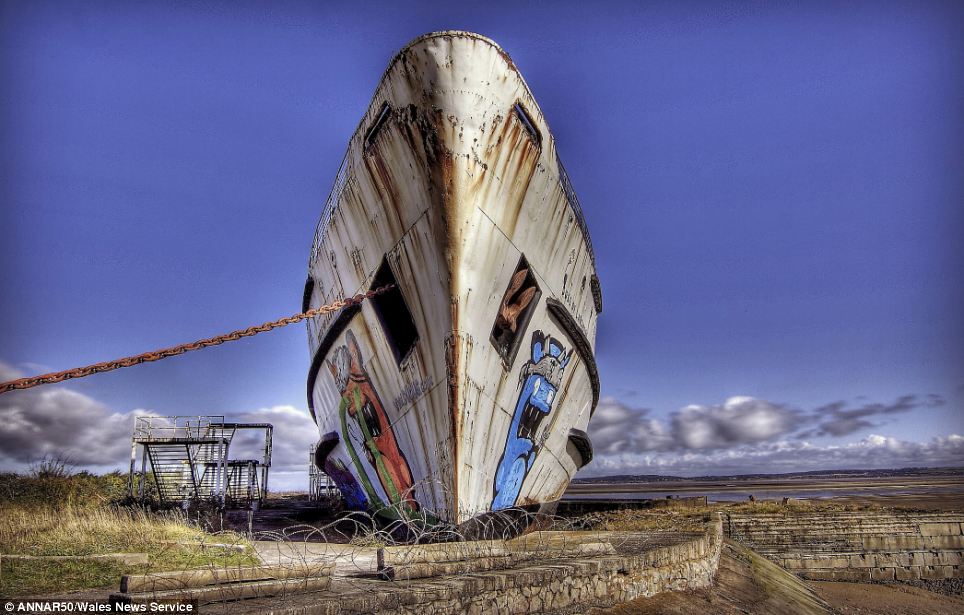 Before I came to North Wales I had read on an article on Facebook, a story about this ship called the Duke of Lancaster which had gone aground on the beach at a small town called Mostyn in Flintshire so I really wanted to go and see this.  I’m really not sure why, but I have a weird interest in weird stories and abandoned shipwrecks, buildings, piers or in some cases whole towns, I don’t know why they fascinate me but they just do. 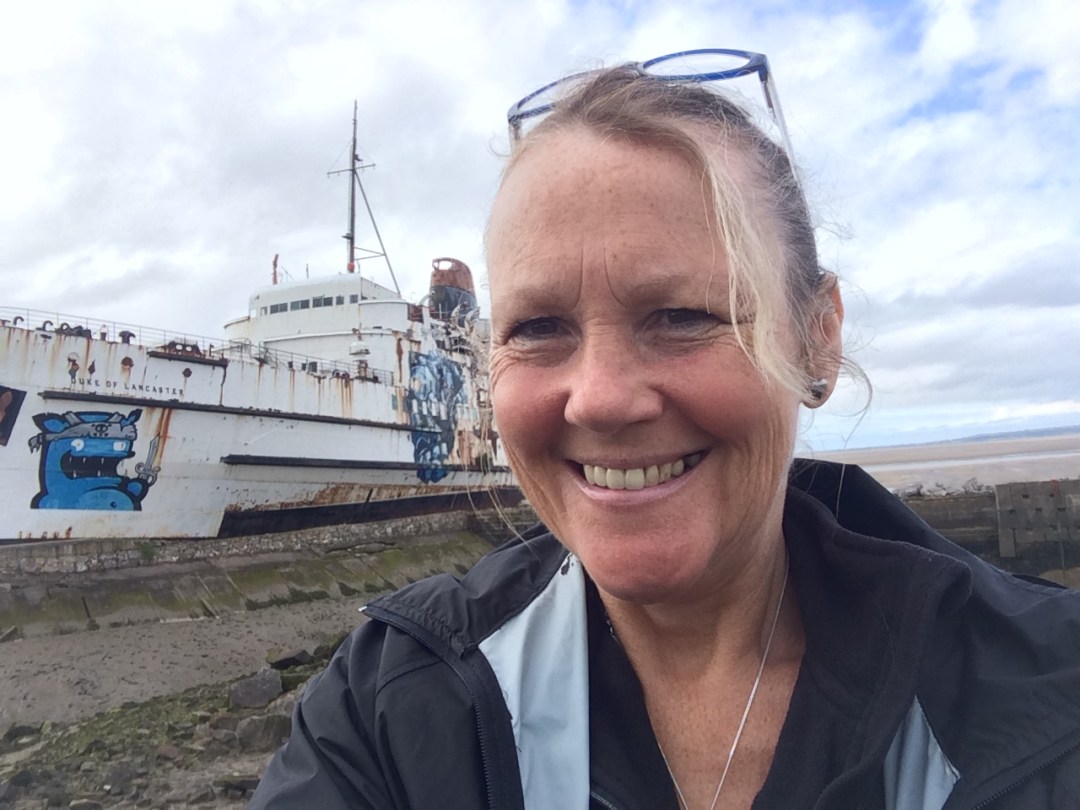 Anyway I asked Nicola, my host about the shipwreck and she said it wasn’t far away so I decided to take a drive and go and find it, I was told that once you are on the right road heading for Mostyn you will just see it.  I drove quite a way on the coast road from Flint and couldn’t see it so I stopped in a carpark and asked a gentleman there who took me to the end of the walkway and pointed further down the coast, around the bend.   I got back in my car and continued my drive and sure enough there it was as large as life, looking like it was in a field,  but as I got nearer it was obvious it was on the beach close to the shore and could be seen the other side of the field. 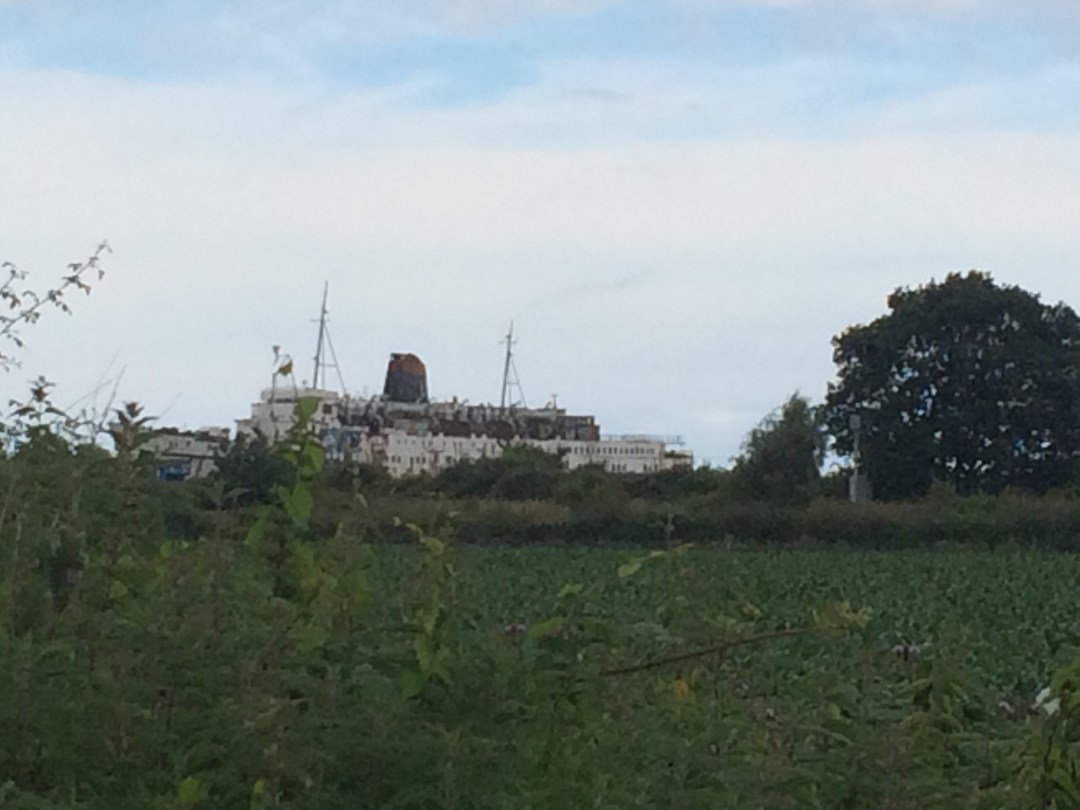 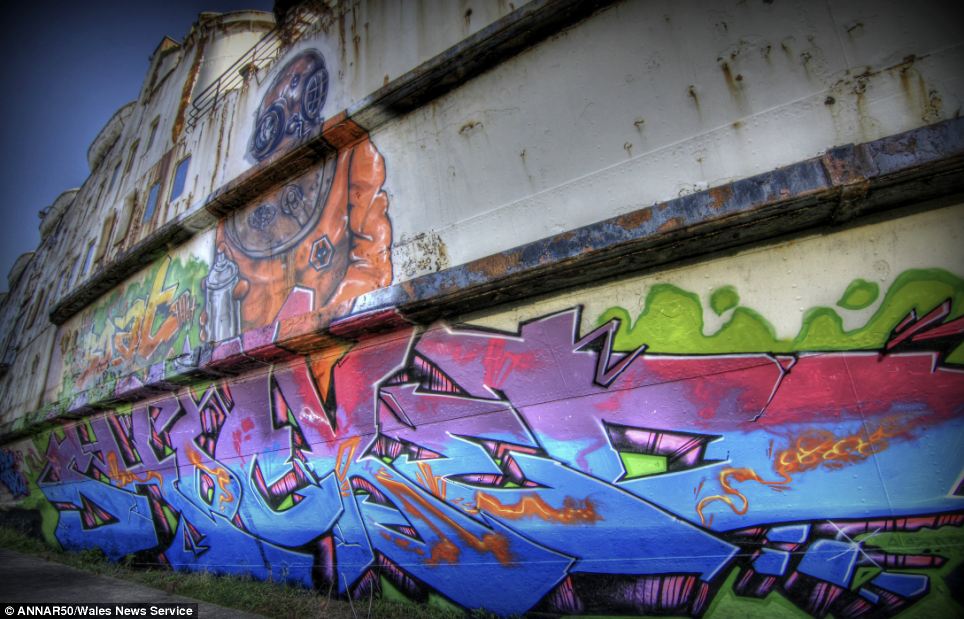 However it had a huge fence built up around it warning people of danger and with “do not enter” signs all around, but I really wanted to take a closer look, I bumped into another couple with their expensive cameras trying to get a closer look just like me, as we approached the fence a car came towards us and the driver got out and explained that he was on guard and that it was being watched at all times in case of accidents so there was no way we could get closer than behind the perimeter fence. I decided to try and get around the other side, where you could see there was a path which took you nearer, but there was a stream in the way, which stopped you from getting too close and trying to climb aboard, which would have been pretty difficult anyway as it was so big, it was far too high to climb aboard.  The hull has been decorated with graffiti by some of Europe’s most talented street artists which looked kind of cool.  The artists, from the UK, Russia, Latvia and Hungary, have named themselves the DuDug collective – a play on the Welsh for ‘black duke”. 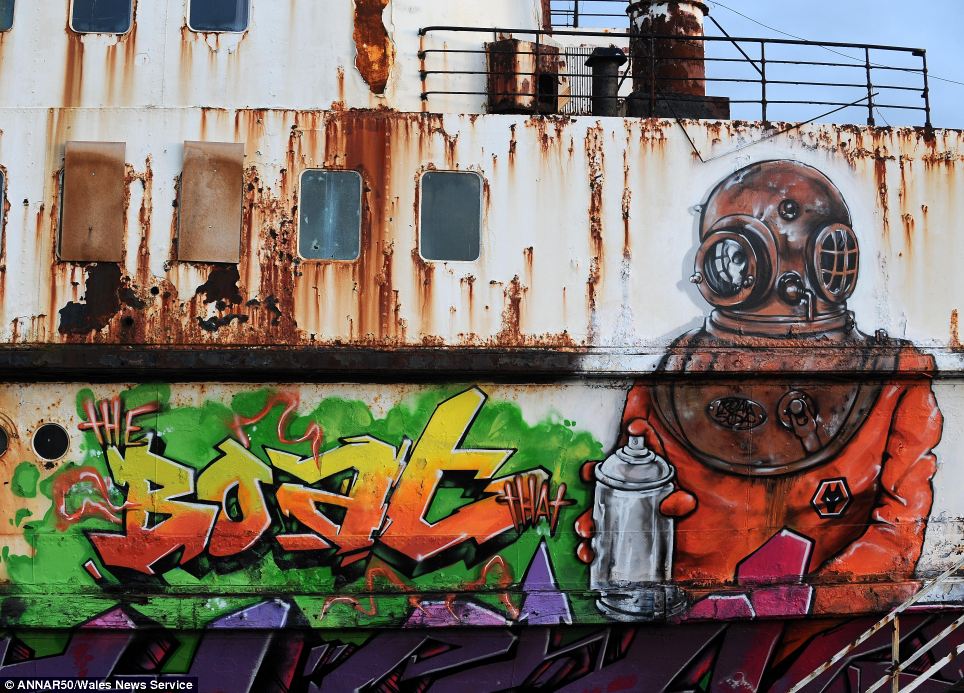 The ship has sat in dry dock in the Dee Estuary since 1979, she was launched in 1956 by Harland and Wolff who built the Titanic and HMS Belfast, after serving as a Sealink passenger ferry she was renamed the Fun Ship and used as a bar and flea market but was closed to the public in the mid-eighties.  The ship’s owner allow the graffiti artists to decorate the ship as the locals want something done with it, the council have scuppered all plans proposed by the owner and the locals want to turn it into a sort of art gallery with all the art being on the outside or a hotel.  The graffiti art is an ongoing project which is not yet finished, but already looks fab.  I love Graffiti, not the loutish nonsense daubed on the side of buildings but the arty stuff.  I used to work in a bar in Butlins many years ago in Bognor Regis called the Graffiti bar and it was entirely decorated with Graffiti, everyone loved it! 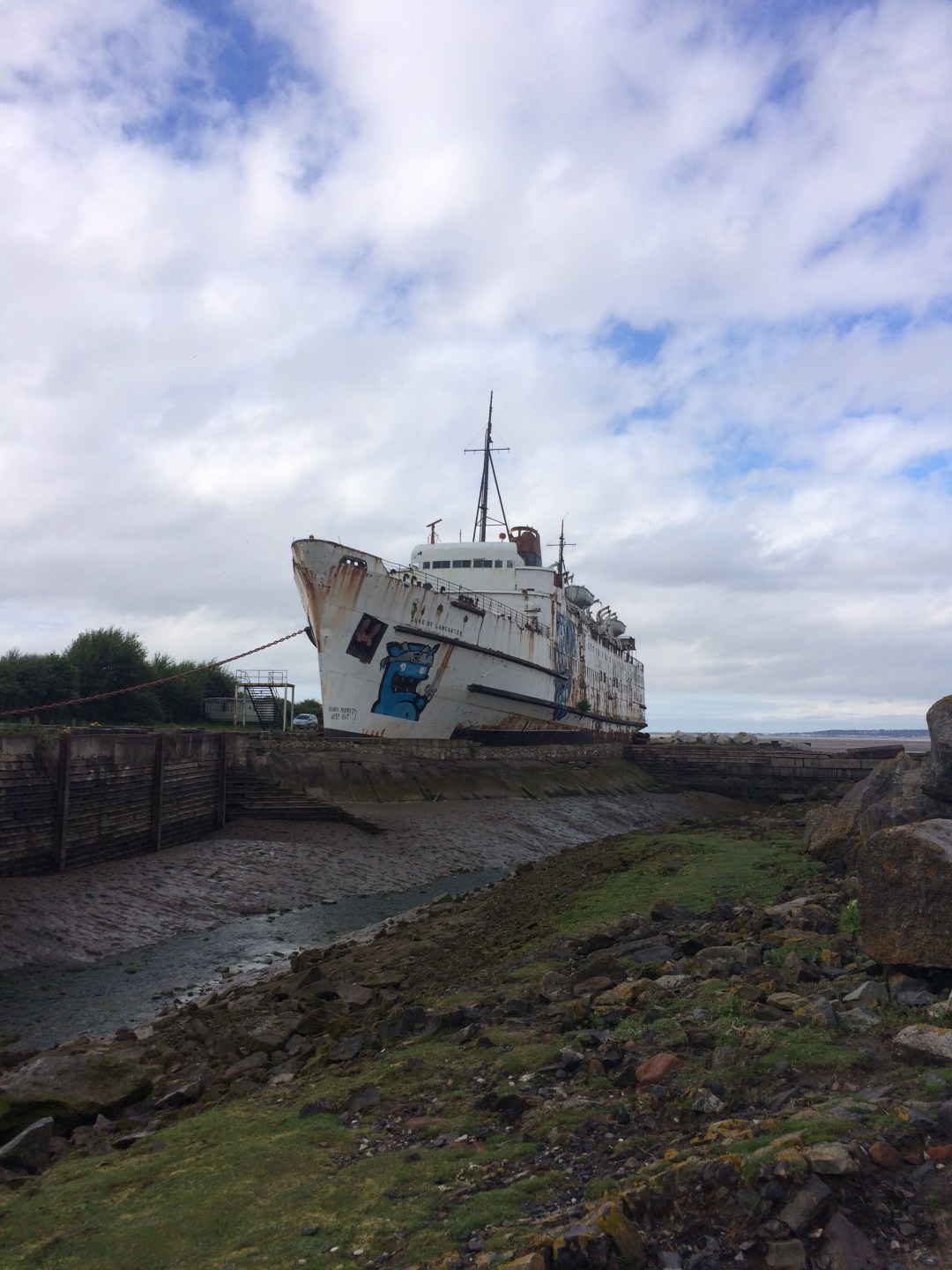 A local group have formed a Duke of Lancaster Appreciation Society, DOLAS and they have a group you can join on Facebook.  I’m going to join the group because I loved the ship and I’m not sure why, but I feel the graffiti adds something to it, it’s definitely a piece of art and most definitely better than some stuff that is actually called art, like that unmade bed by Tracey Emin, Really???????   I think more people would be interested in seeing it if they knew about it. 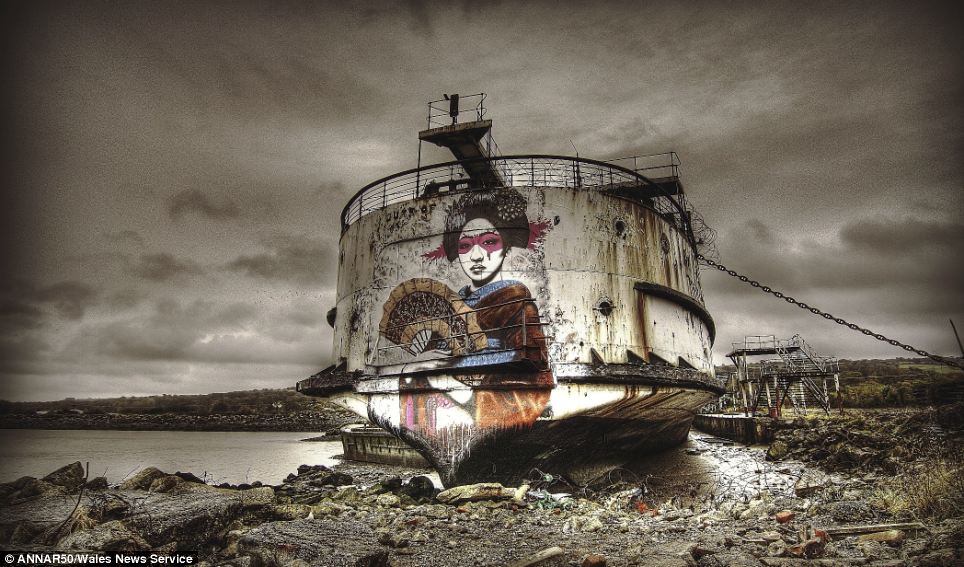 Definitely one of my most interesting finds while in North Wales.  I sat on the rocks, taking some pics while I marvelled at it, wishing I could get closer, I really wanted to get aboard and explore all the rooms.   I might go back and take a walk along the beach at low tide so I can see it from the stern.