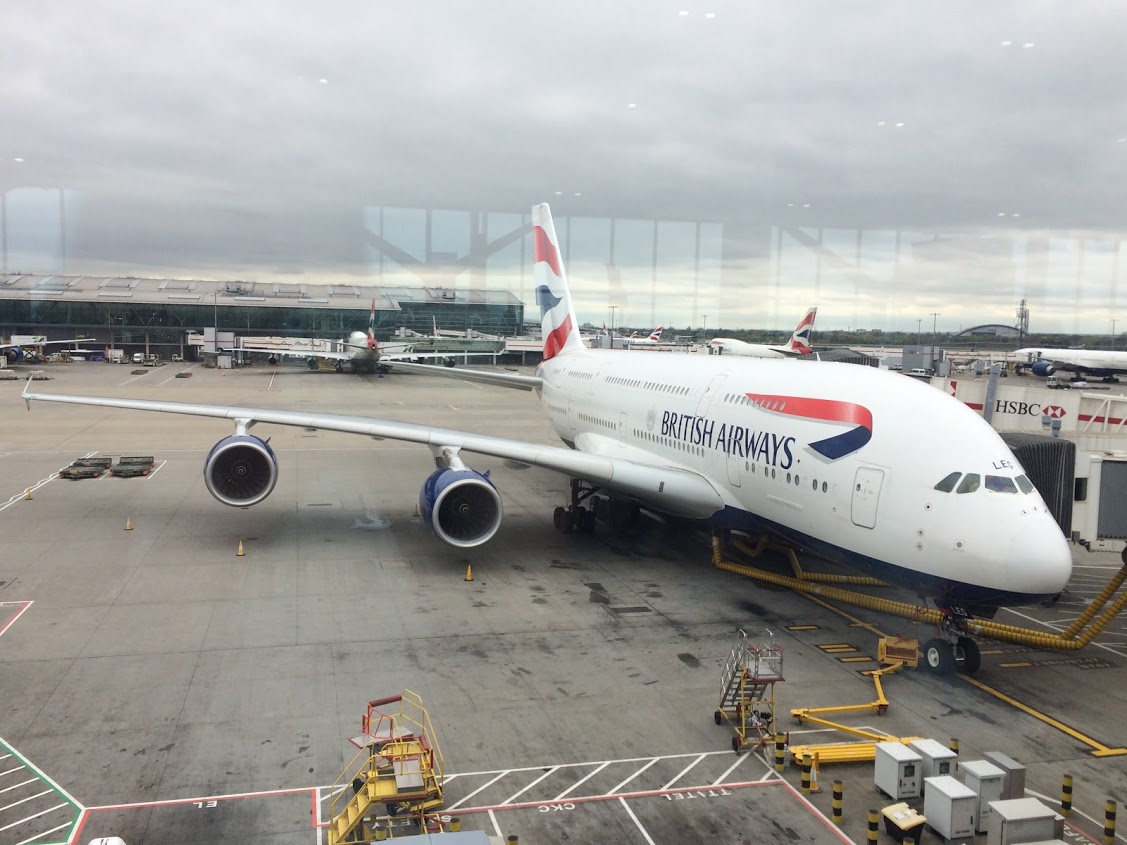 I had a bit of a panic the day before my flight to San Francisco, I logged into British Airways website to check in online but when I tried to enter my details I was informed, for the first time, that I needed an ESTA to travel to USA? What the hell is one of those I thought?  So of course I googled it and sure enough I did need one.

An ESTA is Electronic System for Travel Authorisation which is needed to travel to the USA under the Visa Waiver Programme VWP.  When I read this I had a bit of a meltdown, I looked on the BA site and there was a link to apply for one so I did it immediately not knowing how long it takes, there was a problem with the site and it wouldn’t accept payment, I tried a few times and it just wouldn’t accept, so I tried ringing BA and basically they told me there was nothing they could do, I had to sort It out myself, I tried again to make payment and this time it was accepted, I paid 14 dollars and they told me that the decision on whether my application had been successful or not would be made in the next 72 hours and I was supposed to be flying in 17 hours.

I had to sort food out for my kids as they were all coming for tea to wish me bon voyage, so I got on with the cooking and we all had tea and I checked the website again later and by this time it was about 6pm and I had been accepted, panic over I could fly to the USA after all PHHHeeeewww!!!!! 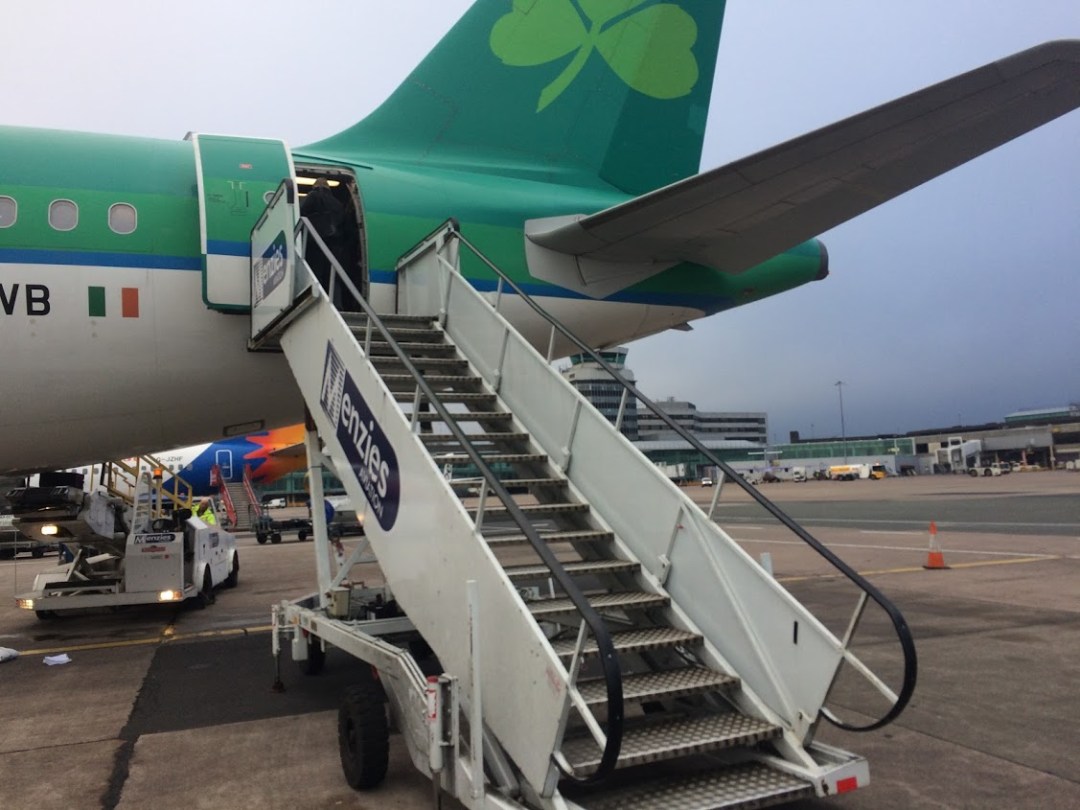 That night I didn’t sleep much, went to bed about 9ish was up by 1.30am ready to drive to Manchester airport.  I left at 2.15am and arrived at the car drop off point at 5.45 am which is not bad, the best thing about driving through the night is the little traffic there is on the road.  I caught the shuttle to Terminal 1 dropped my bag off and awaited my first flight of the day with Aer Lingus to Dublin. 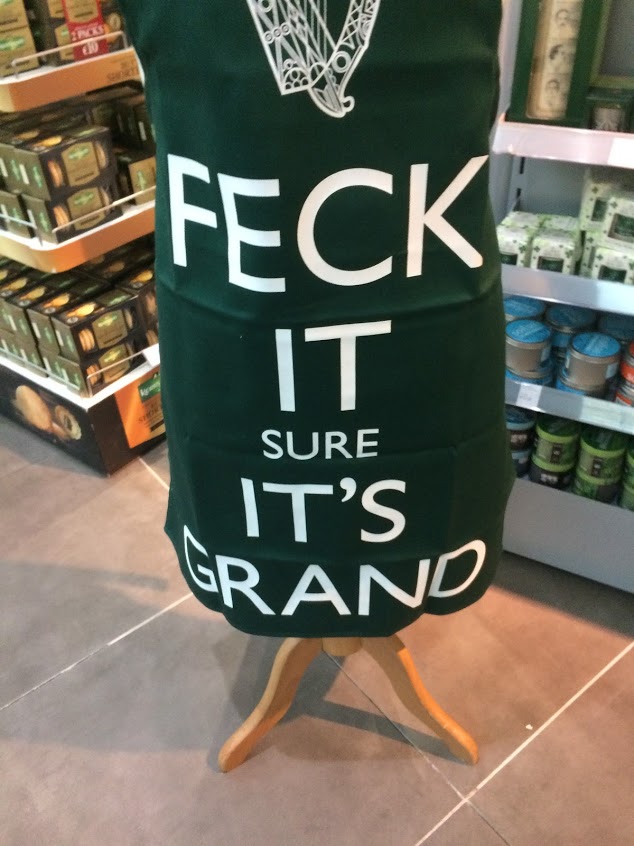 First flight done, lovely hour or so spent in Dublin airport which is another lovely airport, it’s a good job I love airports and planes, it was an epic day today.  I was then fast tracked because of my crutch onto the next flight of the day from Dublin to Heathrow this time on a BA plane, again seated in the middle seat, which I hate, but due to me checking in late online all the window seats were gone! Gutted!! Anyway it was another pleasant flight. 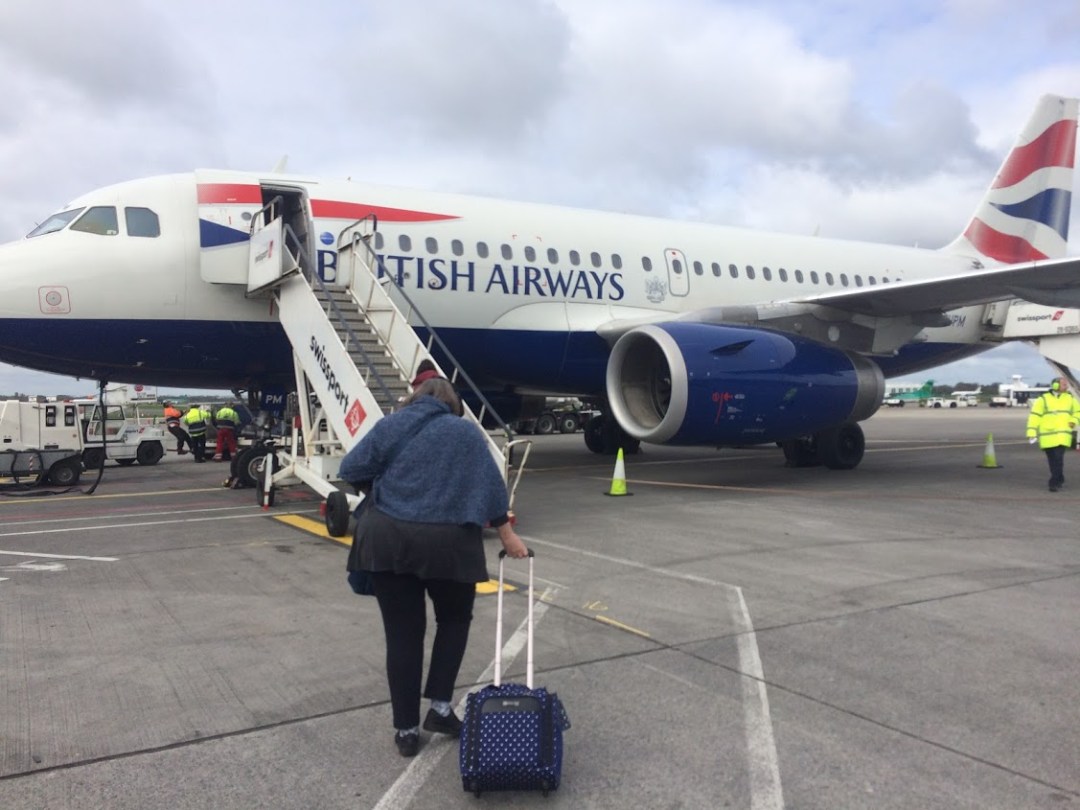 But the piece de resistance was the next flight, from Heathrow to San Francisco on the Airbus380, a massive double decker plane.  It was huge; I loved it so much I just had to ask if I could see the cockpit.  As I was at the boarding gate I asked the stewardess if I could visit the cockpit and she looked at me as if I was mad and laughed and said “no we don’t do that kind of thing”.  I was first on the plane, I was allowed to board early because of my crutch so I asked the steward named Ian who was greeting me onto the plane and he phoned the pilot who agreed, so I went to the cockpit, it was amazing to see all the controls, talk to the three pilots who talked me through the control panel and had some photos with me. One pilot showed me their sleeping quarters and where they eat their food.  It was amazing to think that this tiny space controlled such a massive machine.  I was awestruck, so excited I could hardly speak, needless to say it made my day very special and the best flight I have been on, it was even better then when I flew business class home from Thailand on Thai Air and that was pretty spectacular. 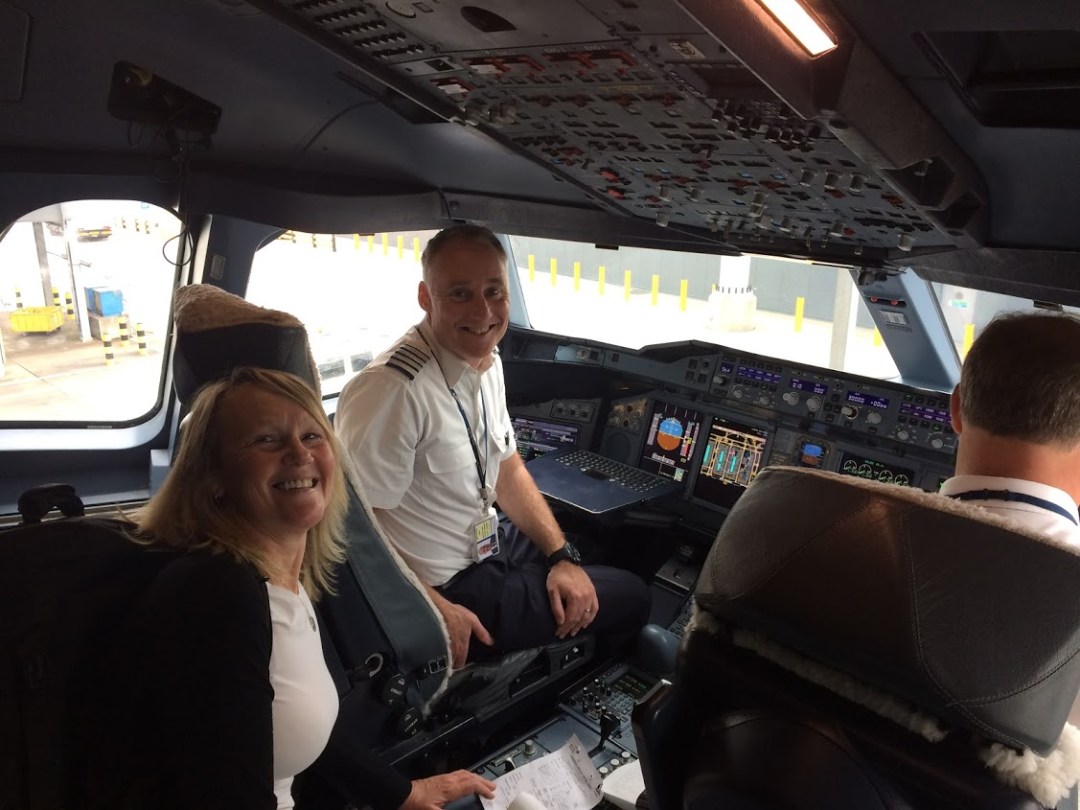 I went to my seat and settled in, again I didn’t have a window seat but at least I had an aisle seat, I was in the middle bank of four seats and I was on the one aisle end, a lovely couple from Idaho sat next to me and I made friends with them on the way, Karen and Derek, we exchanged details and they invited me to Idaho the next time I am in the states, it turns out that they like to travel like me, on a budget, using couchsurfing and Airbnb.  I got on really well with Karen and we chatted a lot during the 11 hour flight, I also watched Absolutely Fabulous film and it was Absolutely Fabulous, so funny, I loved it.  I also started watching Australia but there wasn’t enough time to watch it all. 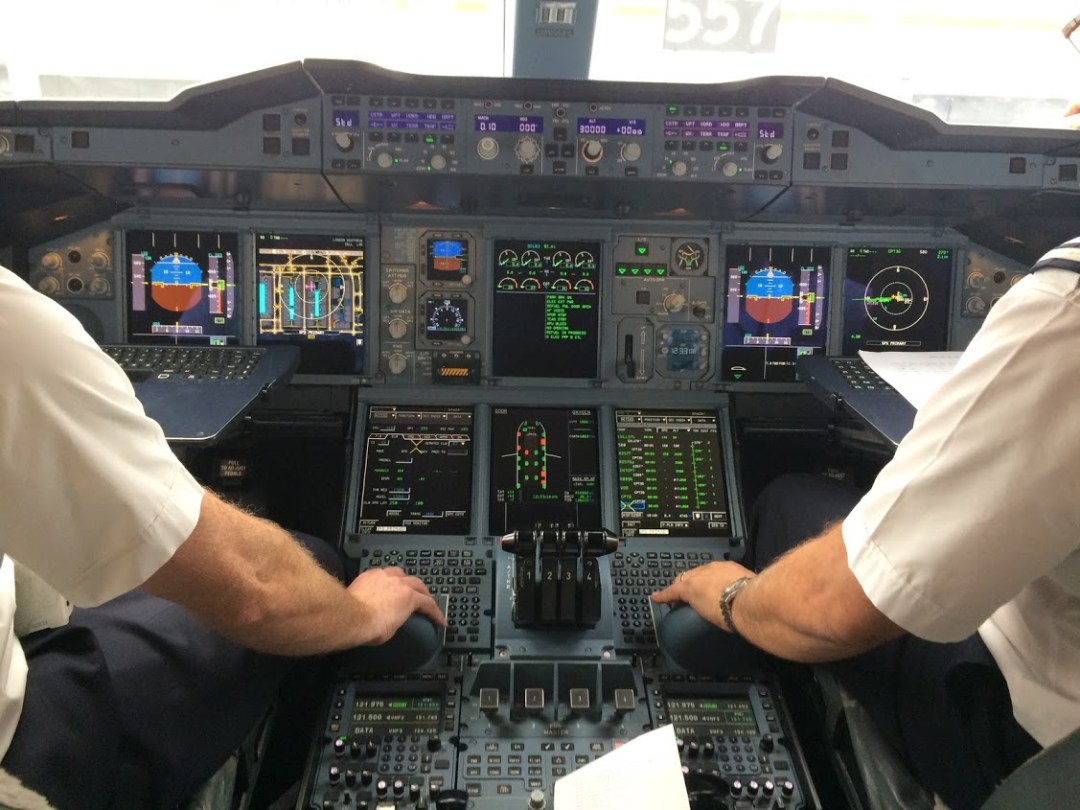 The stewards on the flight were wonderful, especially Ian and Karl, they were very friendly and gave me plenty of wine lol.  I managed to make the shuttle bus which was leaving for Santa Rosa at 6.30pm to meet with the lovely people I am staying with in May in Sonoma County, the wine region.  The shuttle bus had to go over the Golden Gate Bridge on highway 101 to reach Santa Rosa so I got my first glimpse of the bridge, Alcatraz and Sausalito. 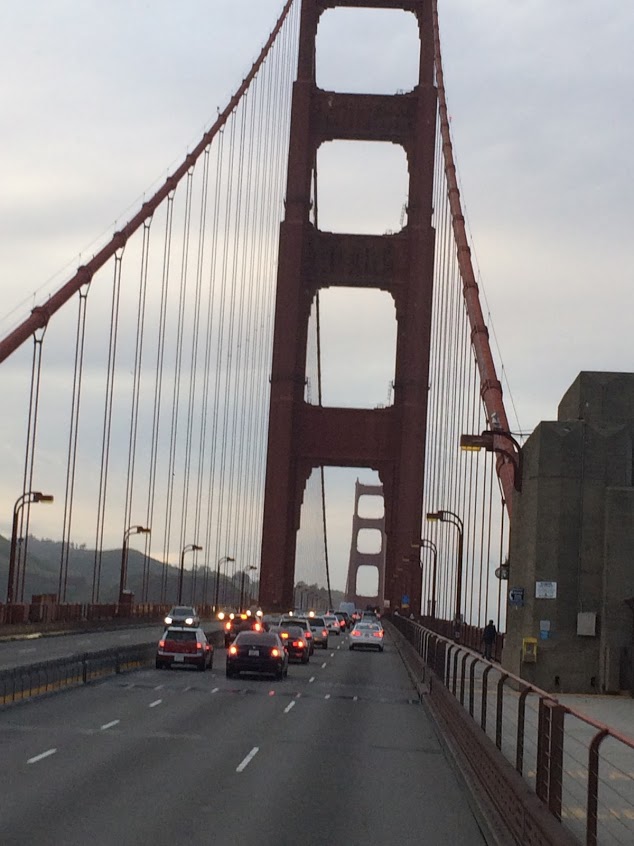 I met a lady on the bus who had just had some bad news, she had just arrived at the airport for her flight when she had a phone call to tell her of a death in the family so she had to get back on the shuttle and go back home, she pointed out some sights to me as we drove to Santa Rosa. 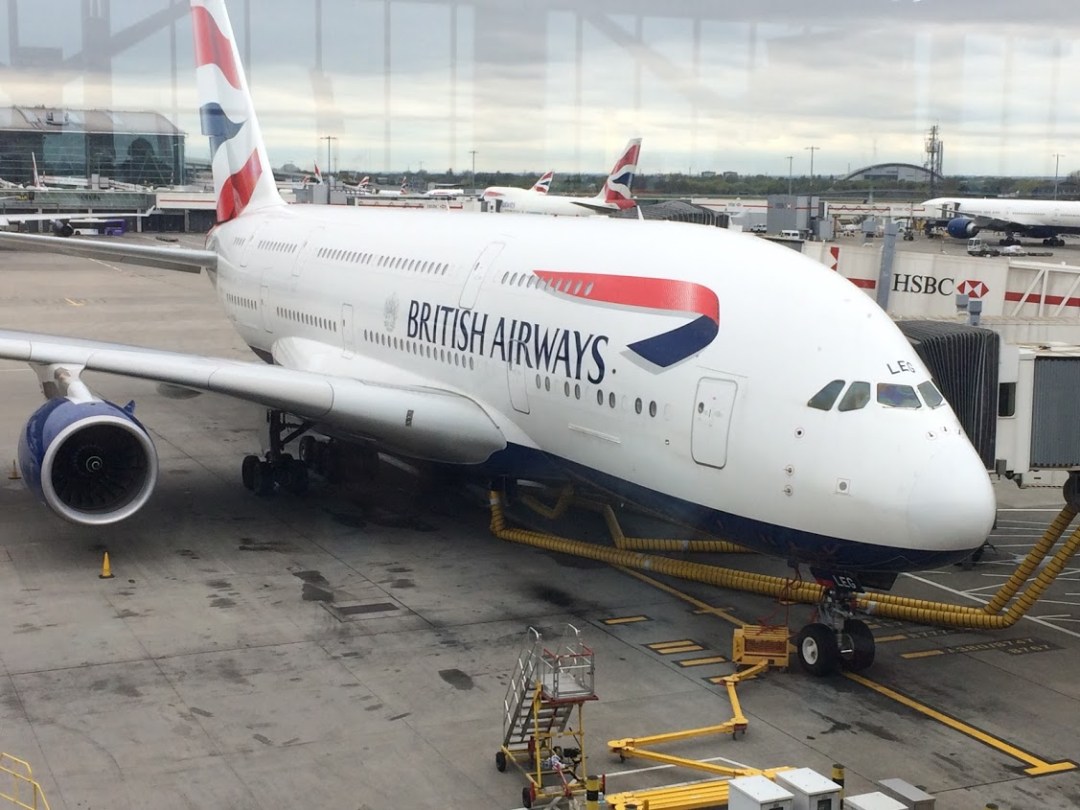 I was picked up from Santa Rosa by the lovely people I am staying with and taken to their home, which is a lovely house in the middle of the wine country, the names of the streets are Chablis lane, Reisling road etc. It’s a beautiful area and they live in a beautiful house.  I have my own little flat in the basement with doors out onto the garden.  I had a small meal when I arrived then went to bed as I was exhausted it has been a very tiring but wonderful day.  Meeting fabulous people, going wonderful places and that plane!! JUST WOW!!!! 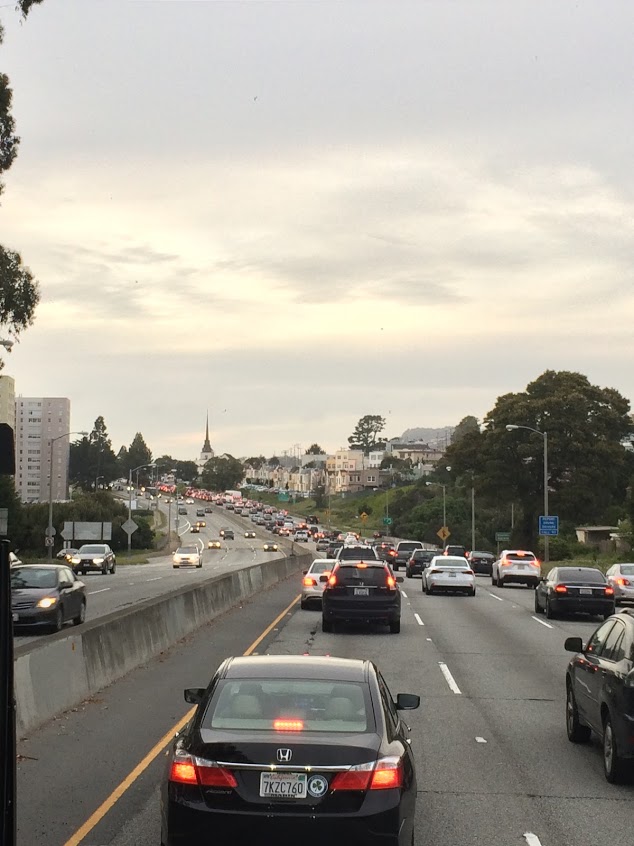 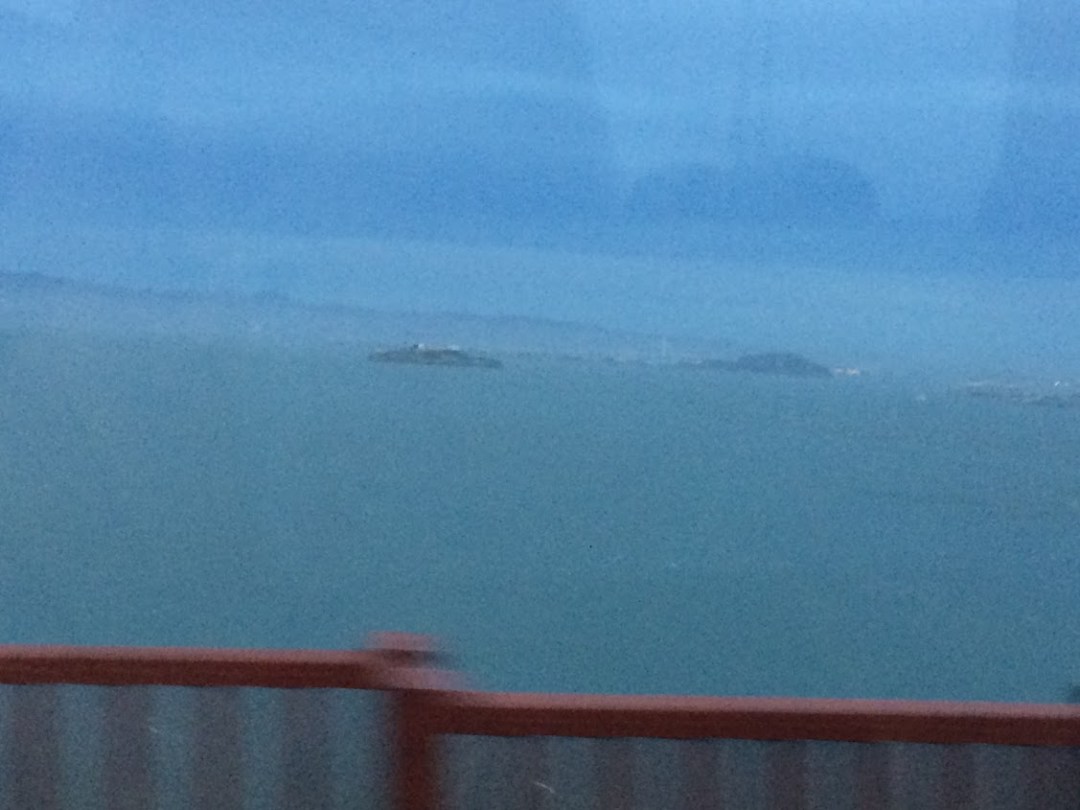 Not a very good picture but that is Alcatraz in San Francisco bay at dusk taken through the bus window! 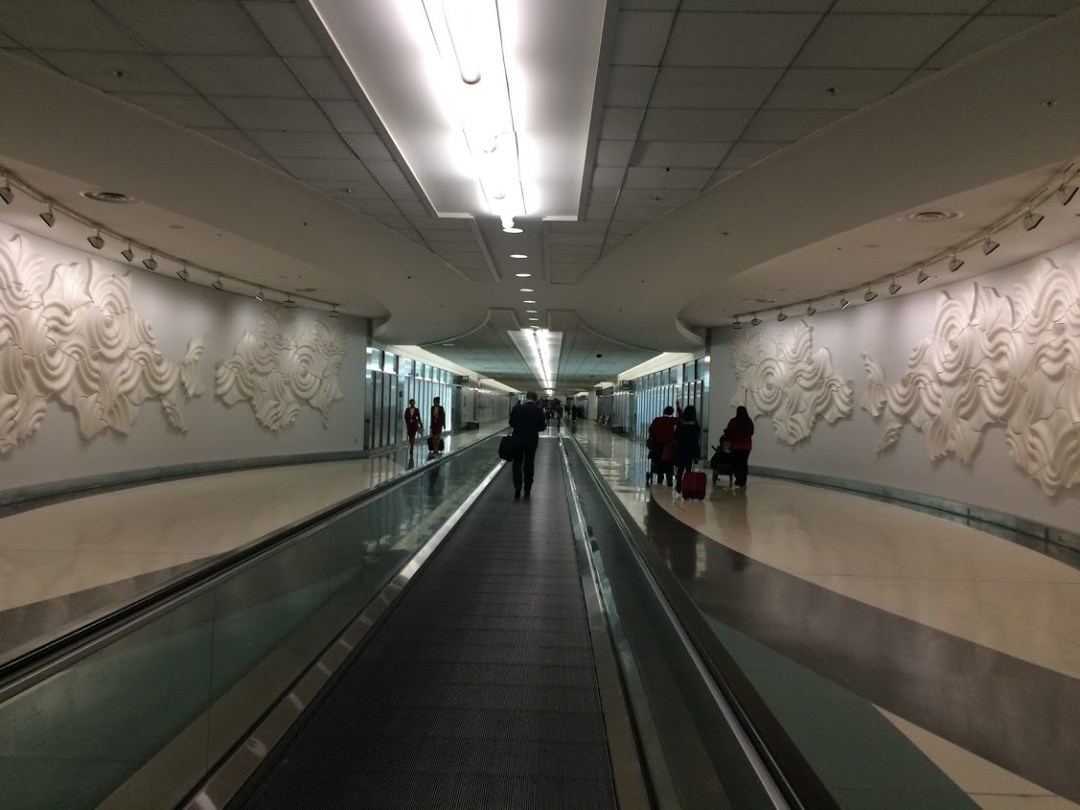 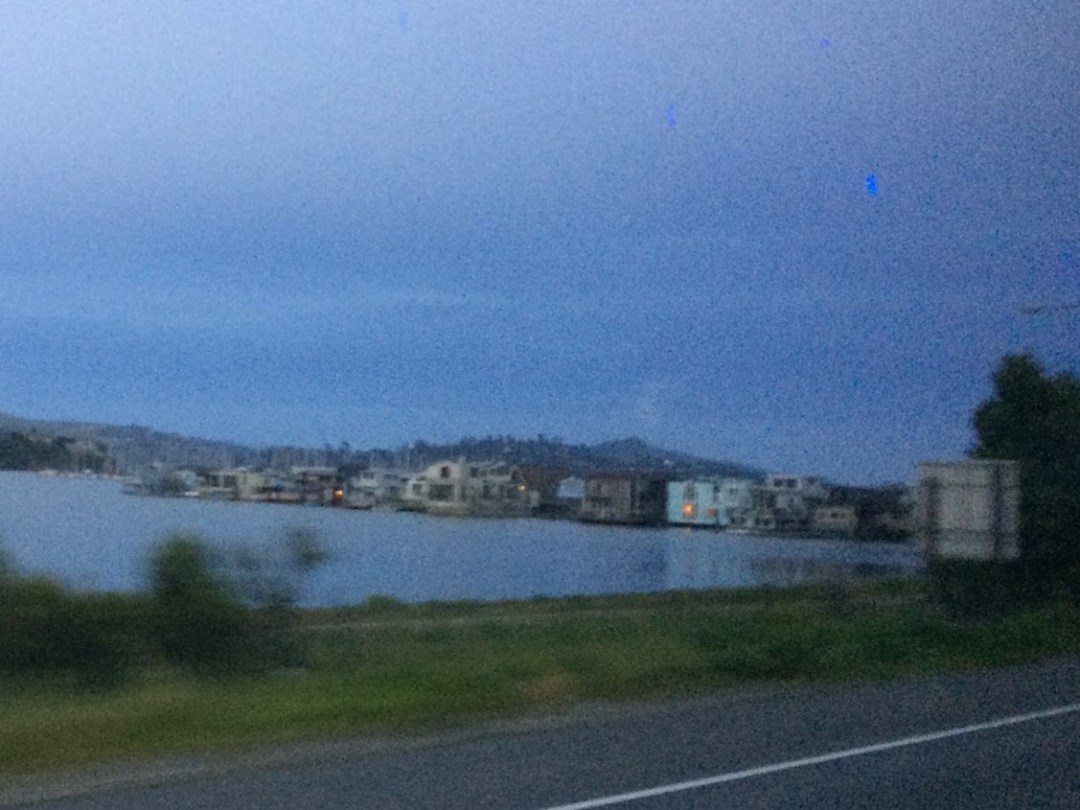 Another blurry bus window pic but this is Sausalito where I’m going to cycle to, the houses here are all floating houses built on the water. 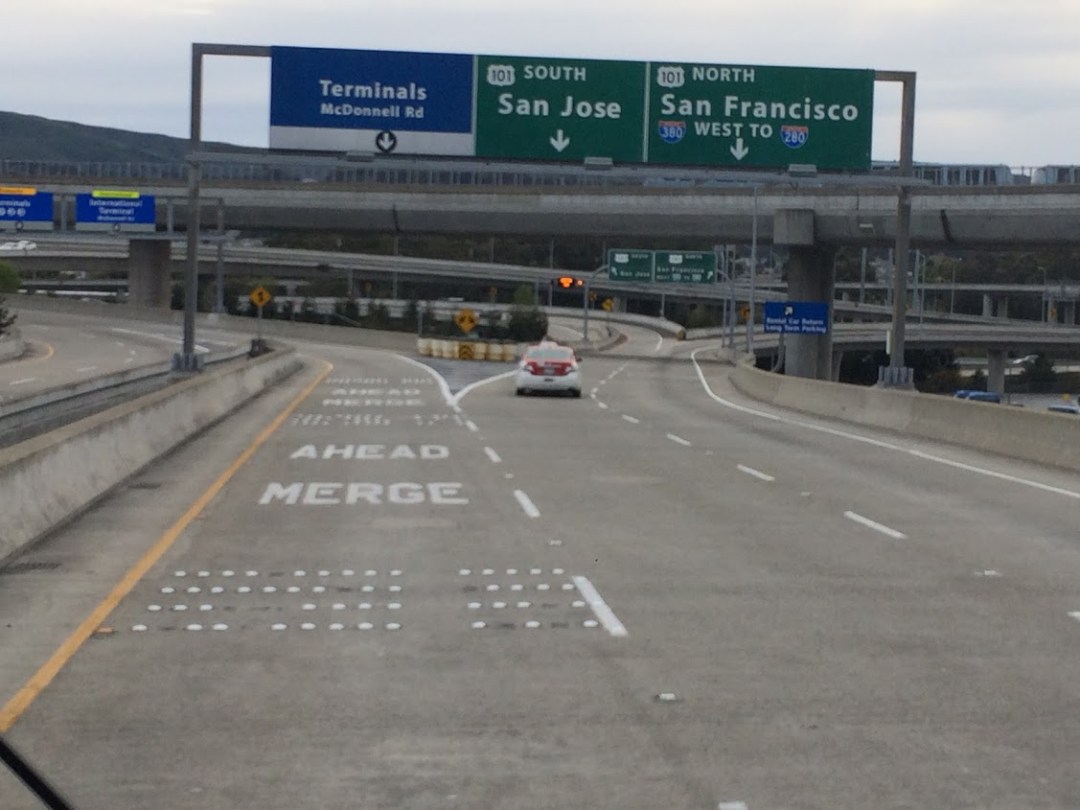 Do you know the way to San Jose??? La la la la la!!  The mad road system coming out of the airport, worse than Spaghetti junction! 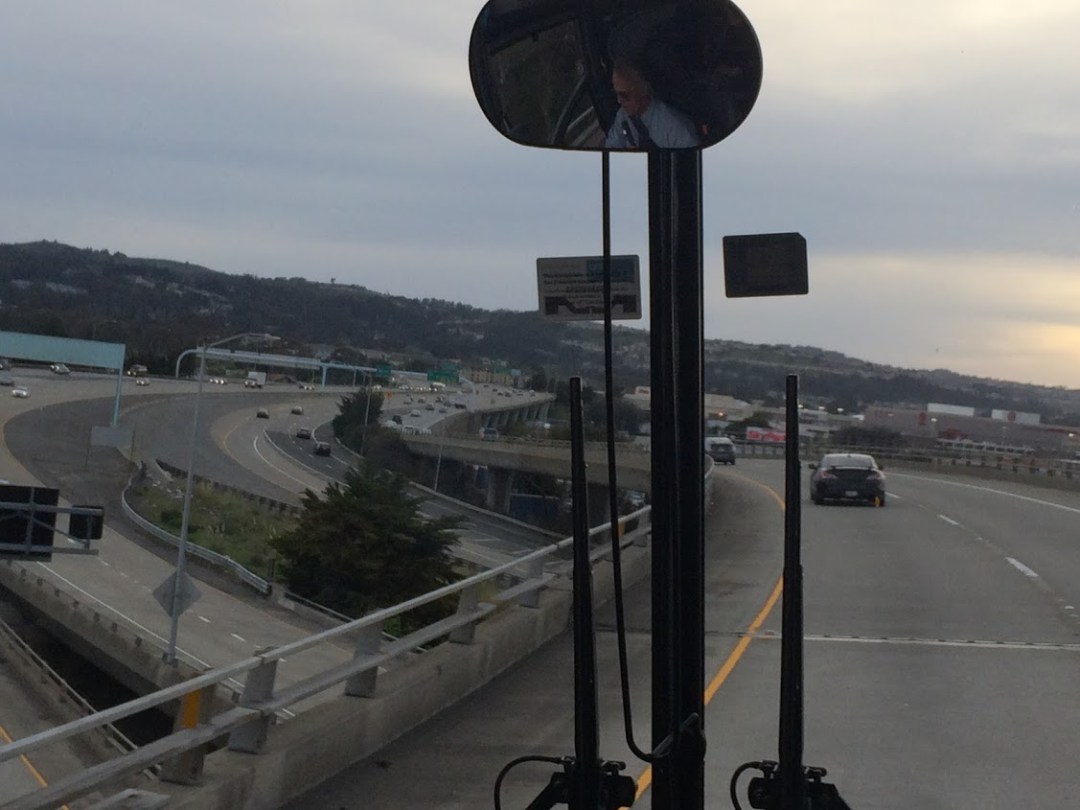 On the shuttle bus to Santa Rosa!